One of the world’s most successful NFT artists, the Italian contemporary artist and blockchain pioneer Andrea Bonaceto, will be taking over Flannels’ flagship store on Oxford Street from 16th May with a new interactive installation of his work titled AB Infinite 1. The artwork represents an interactive snapshot of Andrea Bonaceto’s life in the eternal cycle that goes “ab infinite” (Latin for “from infinity”) to the origin, symbolised by the number “1”.

As an interactive digital installation AB Infinite 1 invites members of the public to become artists themselves, encouraging viewers to alter the digital artwork through a specially designed AI (Artificial Intelligence) mechanism. Andrea’s purpose-built AI collects viewer interactions online through social media channels and turns these reactions or suggestions into visual responses which then appear as part of AB Infinite 1. This represents a new user-friendly form of AI, which does not require the user to be a software specialist or coder in order to manipulate it. Those viewing the installation on Oxford Street will be able to watch as AB Infinite 1 morphs in appearance as people interact with the piece on social media.

To make this even more accessible, people can view AB Infinite 1 on the artwork’s website www.abinfinite1.com which will go live on Monday 16th May. There are 2 steps to follow to become part of this piece:

AB Infinite 1 represents a step forward in the field of programmable NFT art. This innovative approach is possible thanks to the efficiency of the Algorand blockchain, which is used as the technological backbone for this project. Algorand is widely considered the world’s most decentralized, environmentally friendly, scalable, and secure blockchain infrastructure.

As the metaverse gains traction in mainstream society, Andrea’s piece AB Infinite 1, recalls the artworld culture of the 1960s, in which members of the public were encouraged to become artists themselves by participating in collective works.

Andrea Bonaceto is one of the world’s leading NFT artists and has previously collaborated with Sophia the Robot – the most advanced AI humanoid robot in the world. The NFT artworks that Andrea made with Sophia the Robot represented one of the most successful NFT debuts on Nifty Gateway grossing around $3m between primary and secondary sales. Andrea Bonaceto is inspired by the interaction of technology and art in today’s world. In 2021 he received the Fellowship of the Royal Society of Arts.

Bonaceto’s digital installation uses state-of-the-art technology – including an 8K resolution system – to create London’s most optically powerful screen that is entirely wrapped around the outside of the Flannels building. This enables 50,000+ people to see the artwork daily and is part of the longest running permanent art installation in Europe, offering the public new ways of accessing art. The piece will also go on tour in major museums worldwide from the end of May until the end of August. Following the end of the tour, AB Infinite 1 will be auctioned by a major auction house.

A selection of Bonaceto’s portraits will also be incorporated into the digital installation, which honours people part of Andrea’s life and as well as people of influence such as Valentina Tereshkova the first woman in space, the late George Floyd, environmental activist Greta Thunberg, astronaut Neil Armstrong and The Queen amongst others. 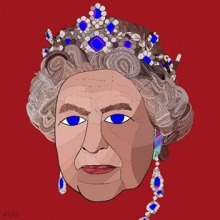 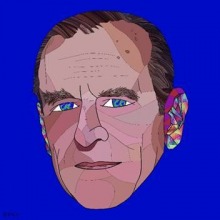 Andrea Bonaceto’s Portraits of The Queen and Prince Philip

Through his recognisable colourful, geometric and distorted artworks, Bonaceto explores the concept of authenticity and the freedom of expression. His portraits reflect this signature vibrant style and his landscapes appear surrealist with references to artistic greats such as Kandinsky and Picasso. The most important factor behind Bonaceto’s work is to achieve an honest attempt to express a true feeling.

This new exhibition comes as art related NFTs swamp the mainstream, with collectors new and established entering the market alongside institutions including The British Museum and Sotheby’s. The art world’s equivalent to bitcoin, NFTs are a paradigm shift and an exciting new trend; the emergence of this movement goes hand-in-hand with the advances in modern technologies including HD screens, projectors and VR headsets. Bonaceto’s piece demonstrates how greater accessibility to, and awareness of, NFTs is likely to change the future of art making and ownership.

Andrea Bonaceto comments: “AB Infinite 1 represents my most profound work so far. It took me years before I had the courage to open up to people and show my art publicly. Once I did that, I went through a cathartic phase that allowed me to better understand who I am. This process is still ongoing, but I can now safely say it’s not a road I am travelling alone. Through compassion and love, we need to come together as a community and become one entity. With this spirit, I created the first iteration of AB Infinite 1. I consider this artwork as permanently unfinished, as I hope there will always be someone in the future who wants to be part of it together with me.”

Kewal Kapoor With Dinis Guarda On Modernising The Digital Content And...

Knowing Your Coupons: History and Use