Digital Transformation and the 4IR – AI, Blockchain, IoT, Fintech is not a steady, fixed concept. It has evolved swiftly, over the course of various years, by gradual improvements of the technology, particularly the Internet, which fostered increasing digitization. Jeremy Rifkin, a US economist, futurist, and sociologist, who has analysed the shifts in society due to technology over the course of various decades, has written widely about the topic. He was the first one to tackle the impact of digital technologies and how these were triggering what he saw as a profound industrial shift.

He described that shift, which he called “third industrial revolution”, in his book “The Third Industrial Revolution; How Lateral Power is Transforming Energy, the Economy, and the World” (2011). In it, he suggested that leaps in evolution happen when there is a confluence of new communication technology, new forms of energy supply, and new transportation mechanisms. His argument is that when these three processes mature, they will augment their aggregated efficiency, and trigger a profound shift in our society.

What were the technologies that converged in those 3 moments of the Industrial Revolution?

Rifkin’s argument focused around his analysis of developed economies. His insight was that the only way these would further increase their aggregate productivity in considerable ways (which is considered to be stagnated since the 1990s), is if they developed an architecture of connected and data driven technologies (cloud, AI, IoT) that would increase energy efficiency in terms of production and distribution. This would also foster what he called a “low carbon economy”. 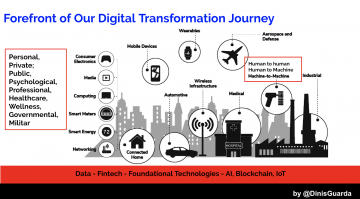 Dealing With Extreme Quantities of Data

Since the invention of the iphone, in 2007, an even bigger shift has occurred, which has further deepened the process of digitization happening in the world. What is triggering it, is the widespread adoption of smartphones.  These are enabling and expanding the digitization process – which began by being mostly a western phenomenon – to all corners of the world. There are now more mobile phones than people, as according to data from digital analysts at GSMA Intelligence, the number of active mobile devices and human beings crossed over somewhere around the 8.19 billion mark.

The result of that expansion in digitization is the escalating amounts of data being produced everyday. That data results also from the increasing  number of sensors/actuators and the expansion of the Internet of Things (IoT). Over the past decade, the cost of sensors decreased immensely, whereas the processing capacity and availability of low-cost bandwidth augmented.

The exponential increase in data has led to profound developments in radical technologies such AI, Blockchain, IoT, and Fintech, triggering now a further shift in terms of industrial revolution. The shift has been quicker than we expected it to be and it is leading us towards the fourth industrial revolution. This is a revolution that intertwines humans and biological species even more with cyber systems. What is enabling that shift, is what Erik Brynjolfsson and Andrew McAfee call the second machine age.

The Second Machine Age and the 4 Industrial Revolution

“Digital technologies are doing for human brainpower what the steam engine and related technologies did for human muscle power during the Industrial Revolution. They’re allowing us to overcome many limitations rapidly and to open up new frontiers with unprecedented speed. It’s a very big deal. But how exactly it will play out is uncertain.” – Erik Brynjolfsson

In 2004 Erik Brynjolfsson and Andrew McAfee wrote a book called “The Second Machine Age: Work, Progress, and Prosperity in a Time of Brilliant Technologies” describing the consequences of the latest stages of the digital transformation and how it was leading us to the fourth industrial revolution. 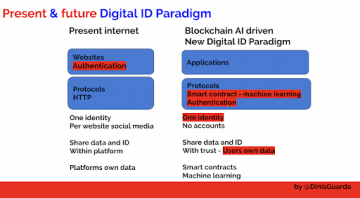 According to Brynjolfsson and McAfee, exponential gains in computing, digitization of goods, and recombinant innovation are all driving rapid technological growth. Technology has begun to perform advanced mental tasks—like driving cars and understanding human speech—that were previously thought to be impossible.

Professor Klaus Schwab, the founder and Executive Chairman of the World Economic Forum calls those advanced mental tasks, resulting from AI’s machine learning and deep learning,  “cognitive automation” (possibilities), and states that these have emerged as a “natural” prolongation out of the fundamentals of IT and mechanistic automation which started around 1969. (Schwab, 2016). Cognitive automation is what makes the current industrial revolution fundamentally different from the previous ones and the shift to what we call now the 4th industrial revolution – 4IR.

Klaus Schwab describes the 4IR in the following way:

“It is characterized by a range of new technologies that are fusing the physical, digital and biological worlds, impacting all disciplines, economies and industries, and even challenging ideas about what it means to be human”.

What characterizes the 4IR, says Schwab, are the three following things: “velocity, scope, and systems impact.”

“Moreover, it is disrupting almost every industry in every country. And the breadth and depth of these changes herald the transformation of entire systems of production, management, and governance”‘.

He further explains how the 4IR is different from the previous revolutions due to its impact on biology. “Digital fabrication technologies, meanwhile, are interacting with the biological world on a daily basis. Engineers, designers, and architects are combining computational design, additive manufacturing, materials engineering, and synthetic biology to pioneer a symbiosis between microorganisms, our bodies, the products we consume, and even the buildings we inhabit.”

In a nutshell, what the fourth industrial revolution is fueled by (and also fostering) are a series of deep shifts in technology producing all kinds of megatrends happening in the world. Some of these are:

In Business, the fourth Industrial Revolution is set to have four main effects across industries:

–  transformed, more demanding, and conscious customer expectations
–  products routinely and quickly enhanced by data, which improves asset productivity
–  new partnerships being formed as companies learn the importance of new forms of collaborative innovation and the values of the circular economy
–  novel operating models and organizational forms which are on one hand more automated, on the other flatter and more peer to peer.

According to Schwab one of the major of disruptions of the 4IR is automation. In his view, machines will be able to simultaneously take over from humans ever more demanding cognitive tasks (i.e.movement, face, voice and text recognition and deep learning), in combination with increasingly complex motor tasks.

How to Get Started With Medical Administrative Assistant Training

How developed is cyber security culture in your organisation: Oil and...

How To Successfully Start A Dental Practice: 6 Things You Need...