One of the risks that a community manager is often called upon to manage is that of negative comments. Unlike forums, which can be moderated so that only approved comments can be shown, social media channels such as Twitter have no such constraints. This means that people can write pretty much anything they like about your company or product without fear of reproach.

Writing nasty comments on social media has become so ingrained in contemporary culture that words such as ‘trolls’ and ‘haters’ have entered common parlance. Although there are some extreme cases where people have been prosecuted for writing inflammatory or libellous remarks on Facebook or Twitter, most of the time it never gets that far. And with the courts in countries such as the UK deciding to raise the threshold for prosecutions, trolls will face even lighter risks in the future.

Although celebrities and other public figures (particularly the subjects of news reports) get the bulk of the social media ‘hate mail’, companies get it in the neck too. There are lots of reasons why someone might choose to write derogatory comments about your company and the products or services it provides. At the more innocent end of the scale, they could be frustrated customers – the easiest group to deal with – but they could also be disgruntled current or former employees or even competitors using underhand tactics to damage your brand.

But before we paint too much of a bleak picture here, we have to get things into perspective. Because trolling is so commonplace, people will often recognise it for what it is and ignore it. They might not even see it, given the huge swathes of new data that are produced by social media every second. But while negative comments can sometimes have a minimal impact for these reasons, it doesn’t mean that the community manager can become so blasé about it that they can afford to ignore negativity when it arises.

The key is to manage the situation correctly. After all, they don’t call them community managers for nothing! Here are a few pointers to help you deal with negative comments directed at your firm online.

Find Out the Root Cause

In terms of devising a strategy to deal with negative comments, it can be a huge help to find out the motivations behind the activity. Possible motivations include a feeling of being insulted, being wronged, or perhaps even a competitor setting out to cause problems for you.

Use Empathy at All Times

It’s important to stay professional, even if the comments are of an inflammatory or personal nature. It’s easy to jump to the conclusion that the hater is some kind of nutcase, or that they are just straight-out lying. In some instances, these assumptions might be true, but you can’t afford to make a mistake with this kind of thing. Put yourself in their place to see if you can see why they might be angry or frustrated, and try to retain this viewpoint when you respond. It’s easy for an exchange of this sort to turn into an online slanging match, and is usually regrettable – remember that even in an argument, you are representing your company, and you could easily be quoted out of context. So be careful about what you say.

Turn the Crisis into an Opportunity

The ideal outcome would be if you could turn a hater into a fan just by the action of dealing with their complaint in an admirable fashion. First, you need to find out if the thing they are complaining about is in fact true. It’s worth remembering that not all wrongs are deliberate or negligent acts on the part of the company. What the hater perceives as a wrong might not seem the same way from a company’s perspective. Sometimes, an apology is all that is required, or the admission that the company messed up.

It’s important to respond using the same channel that was used for the offending comment. For example, if you are hit on Twitter, you should Tweet your response, using a little humour where appropriate to diffuse the situation. By responding well in the same medium, you can lessen the impact of the negative comment.

A common tactic for building up an argument is to move beyond the initial point to widen the scope of the argument. When this happens, it’s important to bring it swiftly back to the original comment and keep dealing with that in order to prevent the comment thread from building up steam.

Move it Offline After a Few Posts

If the conversation continues beyond one or two messages from each side, it’s best to try and engage the hater in an offline chat, and announce that you are doing this publicly. This will keep the conversation proportionally small, while making sure your followers know that you are dealing with it and not just ignoring the complaint.

Don’t Write Anything Private that Couldn’t be Public

When conversing offline with a hater, you should always act as if you are on the record, as everything that you say could be copied and pasted onto a public forum – possibly out of context.

Let People Know When the Situation is Resolved

When the situation has been resolved, or at least brought to the point where the conversation has ground to a halt, you should be sure to make it publicly known that this has happened, preferably within the original conversational thread.

To help you to define a process for dealing with negativity on social media, here is an infographic from the inbound marketing gurus at Kuno Creative: 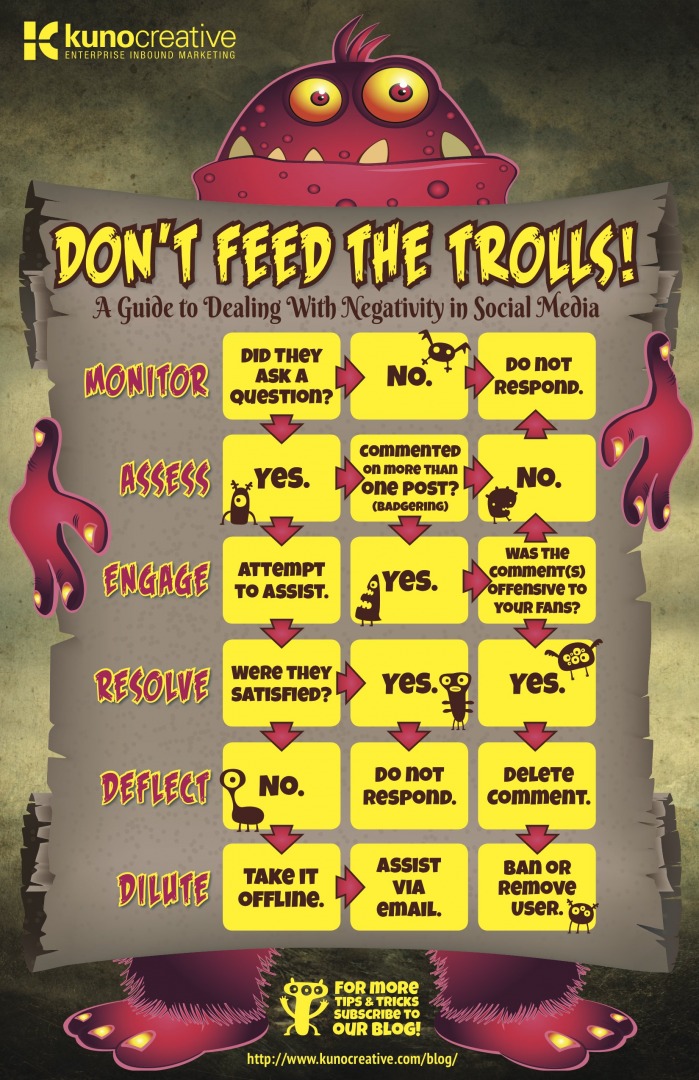 Christie’s and Hyundai Motor Lead The Conversation About The Intersection Of...

Laser Welding: An Emerging Trend After Opening A Production Company