Blockchain technology has the potential to revolutionize industries and systems, including the way we ensure the rule of law, protect freedom of speech, and conduct fair elections. By providing a secure and transparent platform for recording and verifying transactions, blockchain can help prevent corruption and ensure that everyone’s rights are upheld. In this article, we will explore how blockchain technology can help enforce the rule of law, safeguard freedom of speech, and support fair elections.

As the world becomes increasingly connected, technology is playing a larger role in our lives. Technology has had a major impact on democracy, allowing for greater access to information and more efficient communication between citizens and their representatives. Technology has enabled citizens to become more informed and engaged in the political process, allowing them to hold their representatives accountable and participate in the decision-making process. As former US President Barack Obama said, “Technology has made it easier than ever for citizens to make their voices heard in the political process… It has also enabled citizens to organize and participate in protests and other forms of collective action, helping to ensure that their voices are heard”. One technology that is gaining significant attention is blockchain, which offers a decentralized and secure way to store and transfer data. This technology has many potential benefits in our daily life. In this article, we are going to focus on the benefits of blockchain technology for democracy and freedom.

Democracy is a form of government in which the people have the power to choose their leaders and to make decisions about their society. In a democracy, citizens have the right to vote, express their opinions, and participate in the political process. Additionally, democracies are based on the

Democracies are transparent and accountable to their citizens, and they are able to protect the rights and freedoms of their citizens.

What is the rule of law?

Blockchain technology can help enforce the rule of law by providing a secure and tamper-proof way to store and share data. This data can be used to track and verify legal documents, contracts, and other legal documents, as well as to ensure that all parties involved in a legal dispute are held accountable for their actions. Additionally, blockchain can help streamline the process of creating and enforcing laws, as well as providing a secure and transparent way to store and share data related to legal proceedings. This could help to reduce corruption and ensure that the rule of law is properly enforced.

What is freedom of speech?

What is a fair election?

A fair election is an election that is free and fair, and that is conducted in a manner that is transparent and accountable. This means that all eligible voters have the right to vote, and that their votes are counted accurately and without manipulation. Additionally, a fair election requires that all candidates have equal access to the media and to other resources, and that the election is conducted in a manner that is free from fraud and manipulation. Finally, a fair election requires that the results of the election are respected and accepted by all parties.

What is the role of blockchain in democracy?

The role of blockchain in democracy is to provide a secure, transparent, and immutable platform for citizens to participate in the democratic process. Blockchain technology can be used to create secure digital voting systems, allowing citizens to cast their votes securely and without fear of tampering. Blockchain can also be used to create immutable records of political decisions, allowing citizens to hold their representatives accountable. Finally, blockchain can be used to create secure and transparent systems for collecting and distributing public funds, ensuring that public funds are used in a fair and responsible manner.

One of the key features of an undemocratic system is the concentration of power in the hands of a single individual or group. This power is often used to control and manipulate the population, and to maintain the dictator’s hold on power.

Blockchain technology, however, undermines this concentration of power by providing a decentralized and transparent way to store and transfer data. Because it is decentralized, there is no single entity that controls the network, making it difficult for a dictator to manipulate the information stored on the blockchain.

Blockchain technology: Ensuring the rule of law, freedom of speech, and fair elections

One of the key ways in which blockchain technology can help enforce the rule of law is by providing a tamper-proof record of transactions. In a legal system, it is often necessary to have a reliable record of events in order to properly enforce the law and protect the rights of individuals. With blockchain, this record is securely stored on a distributed network of computers, making it virtually impossible for anyone to alter or delete the data. This can help ensure that legal proceedings are conducted fairly and that the rights of all parties involved are protected. Additionally, the use of smart contracts, which are self-executing contracts with the terms of the agreement written into code, can help automate the legal process and reduce the potential for human error or bias. In addition to ensuring the rule of law, blockchain technology can also help safeguard freedom of speech and support fair elections. In the realm of freedom of speech, blockchain can provide a platform for individuals to securely and anonymously share their thoughts and ideas without fear of censorship or retribution. By using encryption and other security measures, blockchain can help protect the privacy of individuals and prevent oppressive governments or other entities from silencing dissenting voices. 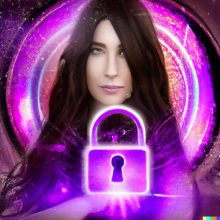 The idea of using blockchain to create a global voting system is gaining traction. The technology could be used to create a secure, transparent, and incorruptible voting system that would be available to anyone, anywhere in the world. The potential benefits of using blockchain for voting are numerous. It could help to reduce the cost of running elections, by eliminating the need for expensive voting machines and manual counting. It could also help to prevent fraud, by providing an immutable and secure record of every vote cast. Furthermore, blockchain could help to increase voter turnout, by making it easier for people to cast their votes. For example, people could cast their votes via their mobile phones or computers, without having to physically go to a polling station. Finally, blockchain could help to make the voting process more efficient. By using smart contracts, the whole process could be automated, from voter registration to the counting of votes. The potential of blockchain for democracy is exciting, but there are still many challenges to overcome. For example, the technology is still in its early stages and there are concerns about its security. Furthermore, there are also concerns about how the technology would be regulated. Nevertheless, the potential of blockchain for democracy is undeniable. If it can be developed and implemented effectively, it could revolutionize the way we vote and engage in democracy. It is something we need to be asking from the UN and multinational peace organizations.

Peyman Khosravani is a global blockchain and digital transformation expert with a passion for marketing, futuristic ideas, analytics insights, startup businesses, and effective communications. He has extensive experience in blockchain and DeFi projects and is committed to using technology to bring justice and fairness to society and promote freedom. Peyman has worked with international organizations to improve digital transformation strategies and data-gathering strategies that help identify customer touchpoints and sources of data that tell the story of what is happening. With his expertise in blockchain, digital transformation, marketing, analytics insights, startup businesses, and effective communications, Peyman is dedicated to helping businesses succeed in the digital age. He believes that technology can be used as a tool for positive change in the world.

13 Things To Consider Before Applying To University

8 Cryptocurrencies that You Cannot Miss out on in 2022

Growing Our Social Hearts. How Social Media Can Help Charities