Maps prepared by the Oxford Internet Institute researchers, illustrates the top websites ranked by country. Google and Facebook are fighting for dominance in much of the world, while Baidu leads in China and Korea, and Yahoo leads in Japan. The map incorporates freely available data retrieved from Alexa. The institute is saying, we have reached the age of internet empires, referencing the popular game with just a few websites dominating global internet traffic. 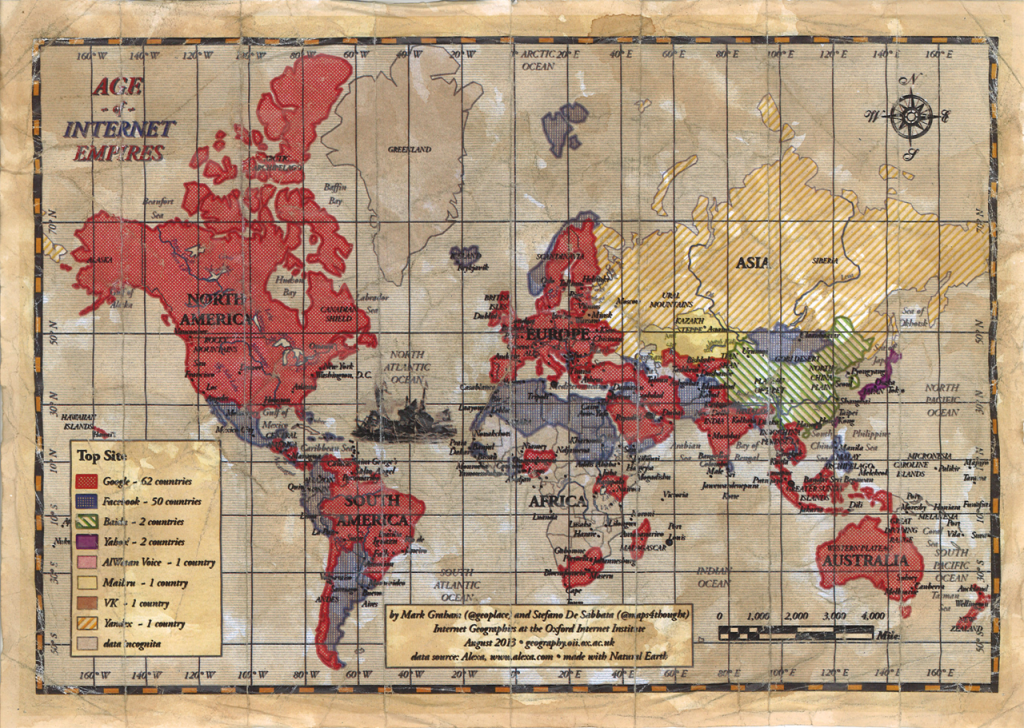 The Oxford Internet Institute led by Stefano De Sabbata and Dr Mark Graham on their blog explained the thinking for the project:

The data used for this visualization were calculated “using a combination of the estimated average daily unique visitors to a site and the estimated number of pageviews on that site from users in that country over the past month”. The data are visualized as a choropleth map, where the color indicates each country’s most visited website. Starting from the evident dominance of two companies (Google and Facebook), whose colors (red and blue, respectively) cover most of the map, we styled the illustration as an old colonial map, and named it after the computer game series Age of Empire. A second map below illustrates the same data, using the hexagonal cartogram of the Internet Population 2011.

In North America and Europe, parts of South America, South Asia and Southeast Asia, Google rules the roost, competitor Facebook, takes its market share in much of Latin America and North Africa. In Asia, local providers have managed to secure user loyalty, fending off the American tech giants. Baidu is well subscribed, as the most used search engine in China, counting for around 80 percent of the Chinese search market. Its success may have been fueled in part by local government influence, whose motive may simply to be limit Google’s encroaching tentacles. 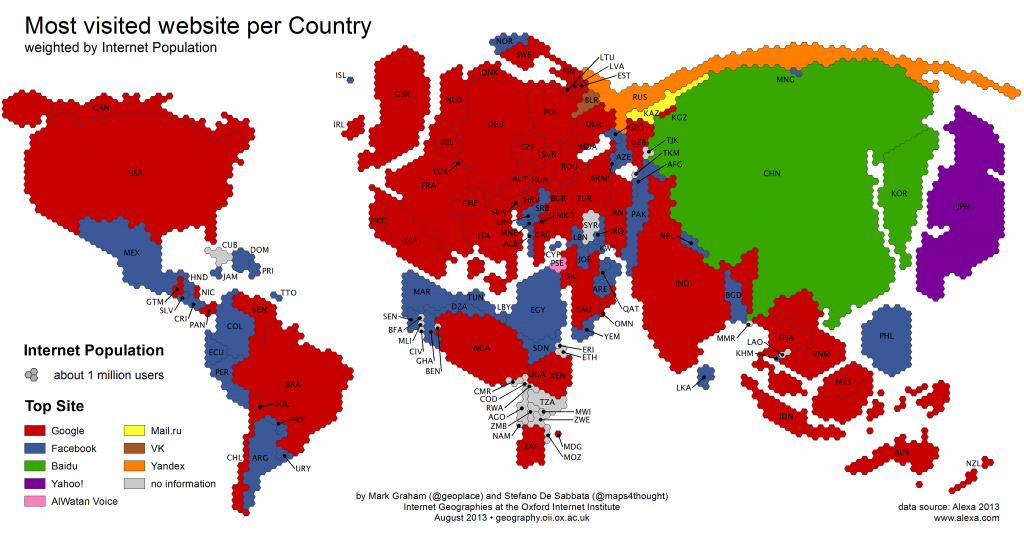 There are a number of African countries missing from the map, the institute explains:

“Alexa does not provide much information about countries in Sub-Saharan Africa. However, most countries that have a significant Internet population are covered. Kenya, Madagascar, Nigeria, and South Africa fall within the sphere of Google’s empire, whereas Ghana, Senegal, and Sudan have been subsumed within Facebook’s dominion”.

Google may very well be the eventual winner. Google is the top site in 62 countries of the 120 countries tracked, but the researchers noted that “among the 50 countries that have Facebook listed as the most visited visited website, 36 of them have Google as the second most visited, and the remaining 14 countries list YouTube”, a google property.

We are seeing the territories carved out in real time. The researchers warned, “the final outcome will have important implications for which companies end up controlling how we communicate and access information for many years to come”.

How developed is cyber security culture in your organisation: Oil and...

5 Big Data Technologies to Watch Out For