As one hears more and more about Bitcoin, which some consider to be the world’s first free market, decentralized global currency, one can wonder what Bitcoin really is. The first time I heard about Bitcoin, was last year, when reading the newspaper “Metro” on a Tube ride in London. Browsing through the article I figured out  that Bitcoin was some kind of strange new currency : electronic cryptographic money. The interesting thing about Bitcoin, the article said, was that it came out of no banking system or company, and no country was involved. It was a currency that could be exchanged electronically from peer to peer.  I became  curious and  I researched more.  I learned how Bitcoins had started in the virtual world in 2009, and could be used now to buy goods and services in various online platforms such as WordPress, Wikileaks, online dating websites such as OkCupid, and until last week, even on Baidu, the Chinese search engine.

The most interesting thing about Bitcoin is that it is changing the way people and governments really think about cash. Even though Bitcoin is not the first electronic currency, after Bitcoin, other electronic currencies appeared,  such as Litecoin, a peer-to-peer Internet currency that enables instant payments to anyone in the world. Litecoin bases itself on the Bitcoin protocol, but  differs from it, as it can be efficiently mined with consumer grade hardware. In case you are interested in learning how to invest and buy Litecoin, you need to secure your LTC coins is to get a dedicated wallet that comes in both software and hardware variants. Another example is  “Mintchip” launched by The Royal Canadian Mint , which is an electronical currency that is backed by Canadian Government, but that borrows a lot from the philosophy of Bitcoin. But what exactly is Bitcoin ? In this article that will happen in two parts, I will try to trace  the History of Bitcoin.

On November 1 of  2008, someone called Satoshi Nakomoto, published a white paper on The Cryptography Mailing List describing the idea of how a decentralised, untraceable digital cryptocurrency could work.  On January 3, 2009, Nakomoto “mined” the first 50 bitcoins, now known as the “genesis block”. The strange thing about this is that the identity of the one who produced those “genesis block” is unknown.  Who is Satoshi Nakomoto ? No one knows,  as a deep fog of mystery protects the real identity of that fictional character, that can be either a “he”, a “she” or a “group”, but is certainly a mathematical genius. Ted Nelson, the American Pioneer of Information Technology, even speculated last May (2013) that the creator of Bitcoin was actually Japanese math professor Shinichi Mochizuki. There is been a long hunt by various researchers and journalists into trying to identify who´s  behind Bitcoin but until  now, the hunt has been unsuccessful. 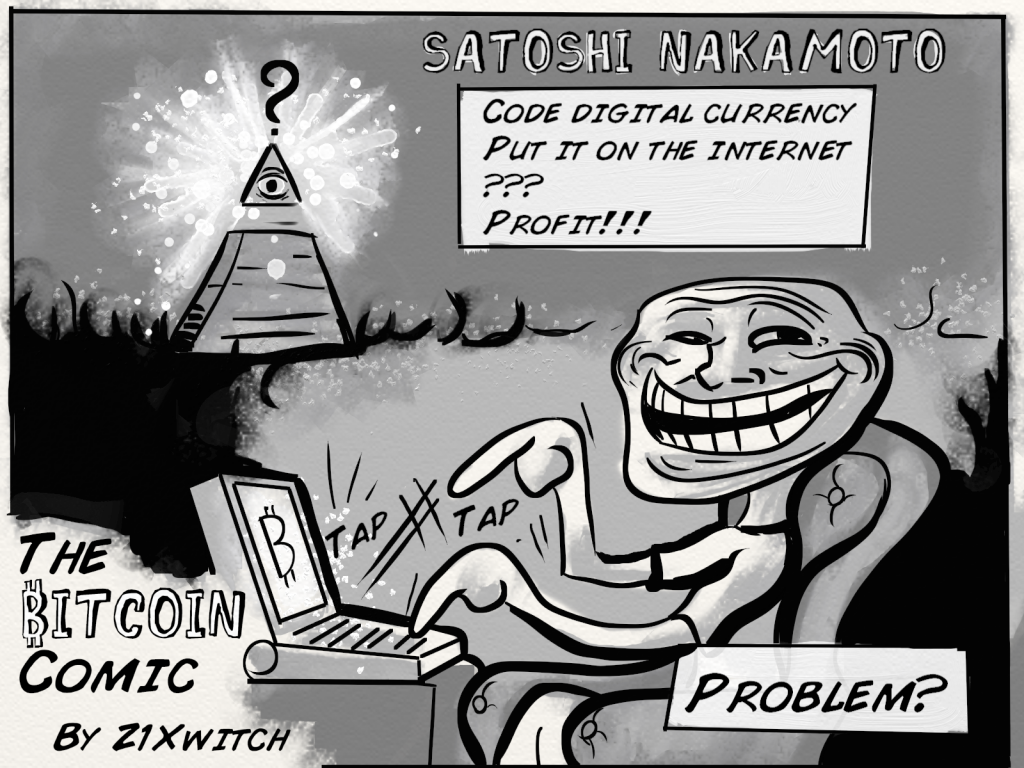 Where Bitcoins come from?

Where do Bitcoins exactly come from? First of all, one has to understand that supposedly there is no centralized organization that decides when to issue bitcoins, and secondly, that bitcoins have no physical representation, they are created out of non-material mental work, by solving the algorithm based Mathematical constructs, that were created by developer Nakamoto. It´s the user´s community that creates trades and controls Bitcoins. To get bitocoins, you have to solve those equations through an open-source computer “mining” system.  When “mining” you produce a virtual commodity that “acts” in a similar way to gold.  The motive of calling the activity of solving equations as “mining” is due to the reason that, just like gold, there is only a fixed number of bitcoins that can ever be mined in the system.

It helps if you think about “mining”  as the activity of  gold miners, going to remote places to dig the land with spades, searching for gold. Just as gold miners,  mathematical experts all over the world, that can be either retired scientists, software engineers or general computer enthusiasts, can spend their free time “mining” bitcoins , by trying to find the solution to the complex maths problems the system gives them to solve, so they achieve a 64 digit  number. The equations are generated and distributed by the software on the peer to peer network. If you are the one to solve the equation, before anyone else on the mining network,  a new “block” is created, and you are given 25 BTC (it used to be 50 BTCs).

To  “dig” bitcoins out of the system, involves mental labor. To help you doing that labor, you can use instead of “your brain shovels”, highly specialized software. The system adjusts the difficulty of mining, so that  a  fixed number of bitcoins  is created  every 10 minutes. The reason for this is to prevent too much currency on the market  very fast, because if that happens, the value of your currency drops.  The system is designed  to be “homeostatic” which means that it self regulates.

As a miner, you have to spend a lot of time and even “real money”  on new software for the process of “mining” bitcoins. Therefore, the faster your system can mine the higher probability you will be rewarded with bitcoins.

Whoever invented this currency did it within a fixed limit, like some precious metal, such as gold. Only 21 million bitcoins will ever be created. The current supply recently passed 11 million, meaning more than half the bitcoins that will ever exist have been created. The last coin is set to be created in 2140, and then there will be nothing more to mine. To be able to “mine” you need to spend tens of thousands of dollars on ASICs  (application specific integrated circuits) to customize your computer for a particular use. Only like that you can perform the calculations faster so you can be attributed a new “block”. ASICs  specific to the “mining” process can be bought here. The system is designed in such a way that the creation of new coins is controlled: the mathematical equations become harder, and every four years,  for the solution of each equation, you just get half the bitcoins you used to get. 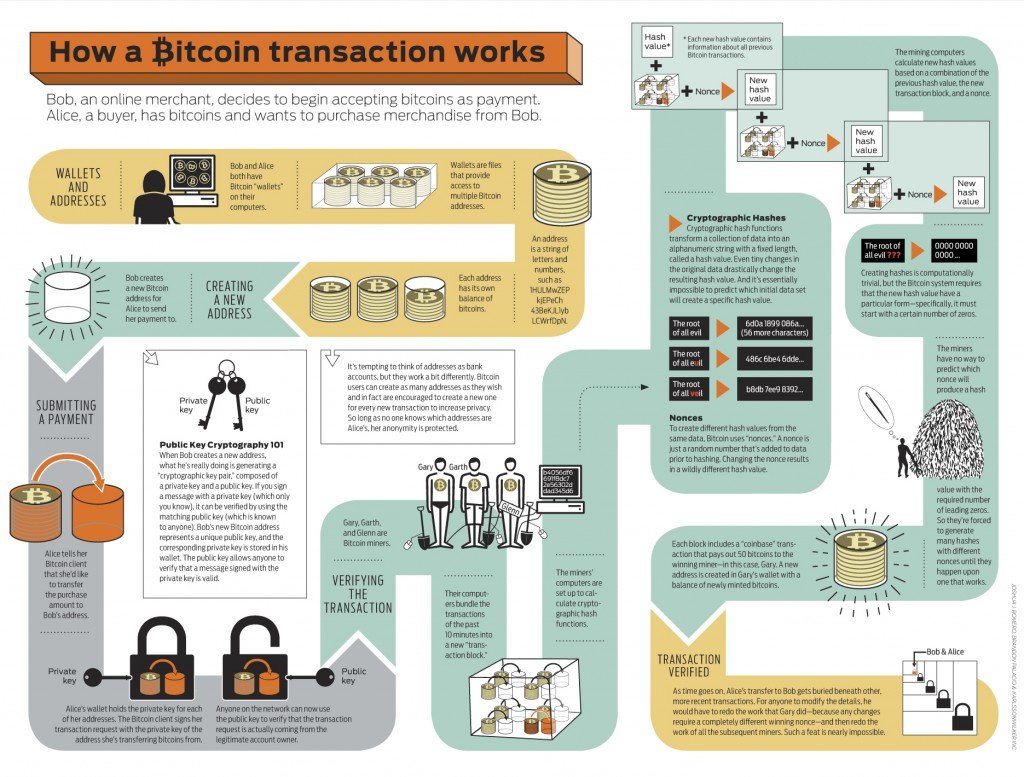 To get Bitcoins one needs first  to download some kind of open source software on a site like www.weusecoins.com. There, you signup for a digital wallet service such as Coinbase or holytransaction.com. Digital Wallets contain your “private keys” which is what you use to make payments. After you acquired your wallet, you need to get Bitcoins. If you would rather not venture into the complex process of “mining “you can find all the information on how to acquire bitcoins in:  howtobuybitcoins. For larger purchases, you need to go to services such as Bitstamp, based in Slovenia, or Mt Gox, the world’s largest Bitcoin exchange, based in Japan.Then you are able to make a transaction.

A transaction means a transfer of value between Bitcoin wallets.  Let´s imagine two users that had bitcoin wallets on their computers. Their Bitcoin wallets keep a secret piece of data called a private key or seed, which is used to sign transactions. That signature provides a mathematical proof that they have come from the owner of the wallet and it prevents the transaction from being changed by anybody once it has been issued. So when  user A wants to pay another one (user B), for example 150 bitcoins, user A´s wallet creates a new address, a string of digitally encrypted letters and numbers, to where user B can send the payment to. A transactionwill look like this:

All transactions are broadcasted between users and usually begin to be confirmed by the network in the following 10 minutes, through a process called mining. Miners verify all transactions (a technically complex process that involves “cryptographic hash functions”) and, once verified, it shows up in your receiver’s wallet as paid. Every payment that has ever occurred on the network get included in the block chain and  can be publicly viewed on services such as BlockExplorer.com. Public “block chains” can be understood as a realtime record of all transactions. The identity of bitcoin owners is  anonymous. Unlike traditional bank accounts, each user does not have one address, but many addresses designed to keep funds secure.

The History of Bitcoin (part two)

How to Ask for a Raise at Work

Candor, the Fulcrum to Higher Performance

Bridging Loans: Tips to Use Bridging Finances for Property Development