In May 2010, an important event happened in the History of Bitcoin, when Laszlo, a  user of a Bitcoin forum, posted in a forum that he had bought pizza for 10 000 bitcoins. The meaning of that slice of pizza was that it legitimized Bitcoin as an effective currency that could be used to buy “real” things such as food. The types of goods you could  buy with Bitcoins were quite limited three years ago, but since then the list has increased to more than a thousand possibilities according to the site spendbitcoins. Lazslo deed was repeated by Rory Cellan-Jobe,  a technology correspondent from  BBC during last spring (2013). Even though he succeeded in buying pizza, he found the process “tricky and cumbersome”.

The Year Of Bitcoin

2013 in general is considered to be an important year for Bitcoin particularly due to what happened in  April, when the currency achieved the billion-dollar landmark as the sum of all the bicoins passed the extraordinary value of one billion dollars.  Bitcoin transformed itself from a vague online currency into a media sensation and it began making the headlines of the press on a daily basis. According to Babin-Tremblay, executive director of the Bitcoin Embassy in Montreal, Quebec, that is cited on a recent article published in Forbes, April´s phenomena had to do with the banking crisis in Cyprus, that happened in March (2013).  When Cyprus Government announced a bail-in for banks, people withdrew funds from their bank accounts, and some of them decided to invest in Bitcoins, so the Government wouldn´t be able to touch their money. He says: “Bitcoins were growing slowly until Cyprus. Cyprus was the catalyst for the big increase in the price.” 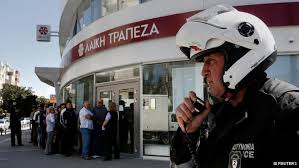 In April of 2013, Cameron and Tyler Winklevoss, the famous twins that are best known for their part in the history of facebook,  became the  first prominent figures that referred that they were part of the largely anonymous Bitcoin world, when they announced that they owned about 1 percent of all outstanding bitcoins, which were worth at the time $10 millions. In July, the twins filed a proposal with securities regulators, having a plan to develop an exchange-traded fund, that  would hold only Bitcoins. This would allow any investor to trade Bitcoins, just as if they were stocks. The Winklevoss Bitcoin Trust proposed that it would enable the possibility of sending digital money from the realm of computer programmers, Internet entrepreneurs and a small circle of professional investors like themselves into the hands of virtually anyone with a brokerage account. 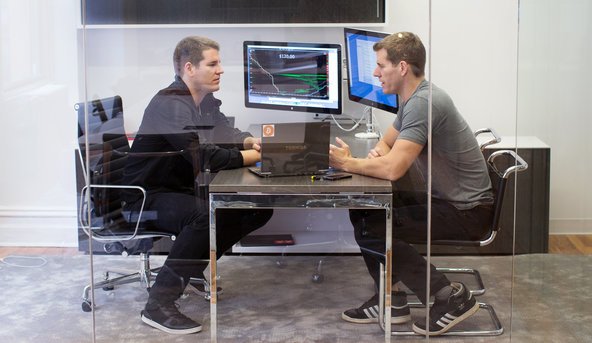 In September 2013,  SecondMarket, an upstart stock exchange (which gained notoriety as the first one to allow investors to buy shares of trendy private companies like Twitter) turned its attention to Bitcoin and announced that it would begin raising money for an investment fund that would hold only Bitcoins, giving wealthy investors exposure to the trendy but controversial virtual currency. The fund that is entitled The Bitcoin Investment Trust, aimed to provide a reliable and easy way to bet on the future price of Bitcoin.

On October 2, the FBI busted the drug bazaar, and froze 26 000 Bitcoins worth more than $3 million that were deposited in users’ accounts.  Given the anonymous nature of the currency, Bitcoin is known to be largely used in black markets that sell illegal goods, and it became the preferred form of payment on the Silk Road. After the arrest, the Bitcoin market fell abruptly but only for a brief period of time, as it recovered again. 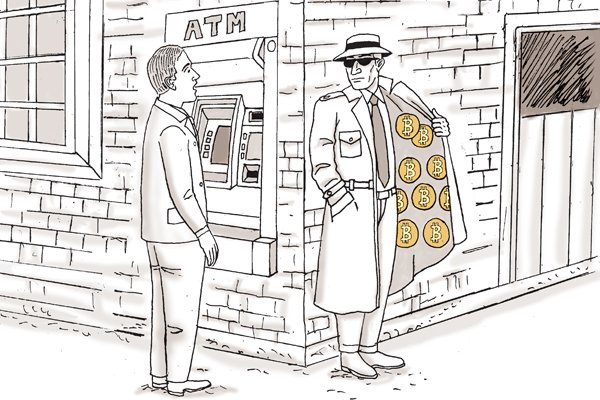 Also in October, the first Bitcoin ATM  opened in Vancouver. The kiosk, which looks like an average cash point,  but with hand and barcode scanners, is located at a trendy coffee shop in Vancouver, British Columbia. Through this ATM, users can scan their hand to confirm their identity, and then they can move funds to or from a virtual wallet on their smartphone. The system limits transfers to $1,000 a day. 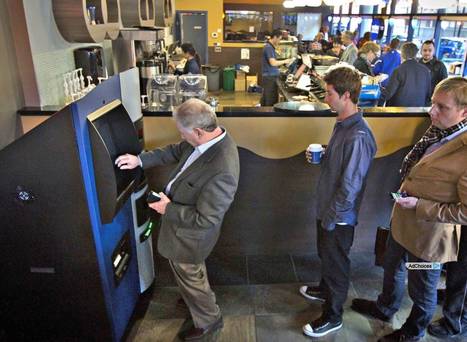 Mid November saw an important moment in the history of Bitcoin, when federal officials in the United States signaled their willingness to accept it as a legitimate payment alternative. This hearing was historical because if a currency is not recognized by nations and institutions, its value is restricted.  When federal officials told the Senate that financial networks such as Bitcoin offered real benefits for the financial system, they granted legitimacy to Bitcoin. They recognized as well the new forms of digital money provided alternatives for money laundering and illegal activity.

The 21st of November, The University of Nicosia in Cyprus became the first university in the world to accept the virtual currency Bitcoin which augmented the credibility of Bitcoin. Finally during the last week of November Bitcoin hit the headlines again when its market price climbed to an alltime high of $1266 on November 30 (2013)  and then dropped below $800 a week later. The press wrote  about a “Bitcoin Bubble”.  Babin-Tremblay, executive director of the Bitcoin Embassy in Montreal, Quebec, attributed the coin’s latest gigantic rise, to the result of Chinese demand that was really high in November, when some prices quoted on Chinese exchanges were almost double compared to exchanges outside the country.

By the end of November, the tiny island of Alderney, a British crown dependency, said they wanted to become the first jurisdiction to mint physical Bitcoin. Alderney, a three-mile long island and one of the British Channel Islands off the coast of France, had plans to start issuing  physical Bitcoin since the summer. The assumed project is in partnership with the UK’s Royal Mint and it would make the physical Bitcoin a part of the Royal Mint’s commemorative collection. Also in November, a London street food vendor claimed to have sold the capital’s first “Bitcoin burger” after becoming one of the first in the UK to accept the digital currency. 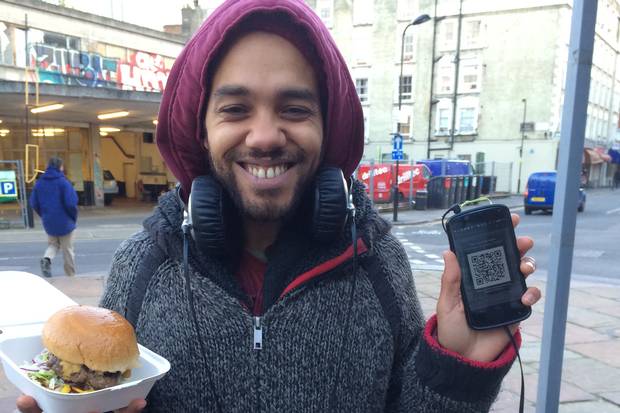 December saw a turning curve on Bitcoin, when the Chinese government suddenly announced last week, on the 5th of December, that China’s central bank had barred banks from handling bitcoin transactions, which made the currency´s value drop abruptly.

What will happen next?

Bitcoin made the headlines so many times in 2013, that it triggered various analysts to interpret the Bitcoin phenomenon and predict the real value of this crypto-currency to our future. One of the most interesting questions that Bitcoin has raised, in my opinion, was that it relaunched once again the debate on what money really is. In an article published on “The Washingon Post last April (2013) Neil Irwin wrote that even though the Bitcoin was “ludicrous”, it could be seen as “an important window into the strange and uncomfortable mystery of “what is money”. And he cited Narayana Kocherlakota 1996 paper  “Money is memory”. In it  Narayana Kocherlakota, who he´s now the president of the Minneapolis Fed referred that money is “the way we as a society record how much capacity to buy stuff each of us possess”.  As Irwin puts it: “what makes money money is what you can do with it. If you can purchase the goods and services that you want and need with it, it is money; if you can’t, it isn’t”. Other interesting comments relate to wether the bitcoin will succeed as a currency and if it  a healthy one.  The Nobel Prize-winning economist Paul Krugman refered already in 2011 that even though the bitcoin’s reliance on a fixed money supply could  possibly make it a good investment, it was not a healthy currency as “hoarding” damaged its usefulness as a currency. As he said in 2011 to The New York Times: “What we want from a monetary system isn’t to make people holding money rich; we want it to facilitate transactions and make the economy as a whole rich. And that’s not at all what is happening in Bitcoin”.

As we have seen, Bitcoin  can lead to speculation and hoarding, such as what happened in the November bubble, that it  was attributed to Chinese investors hoarding money offshore. Some skeptics have compared  the frenzy over the bitcoin network created by anonymous programmers in 2009  to  the mania for Dutch tulip bulbs in the 1600s , and they question if it is really the beginning of an actual currency. “To say highly speculative would be the understatement of the century,” said Steve Hanke, a professor specializing in alternative currencies atJohn Hopkins University.  Other opinions such as the ones professed by Babin-Tremblay to Kicto News, published in Forbes, state that even though Bitcoin is highly volatile: “bitcoins are just the start of the crypto-currency market, which will continue to grow because they fit an important niche in the global financial system”. And it reminds us that  “here is room for improvement but the bitcoin is still in its infancy.”

One thing that Bitcoin certainly did was to provoke the advent of lots of other crypto-currencies, or altcoins  in a wave of innovation in terms of digital money. Some of these are Litecoin, that was created by Charles Lee. Another one is Peercoin that has no money-supply limit, has a  built-in inflation of 1% and is considered to have a more energy-efficient “mining” process. As with Bitcoin, its creator is unknown. Other cryptocurrencies are Anoncoin and Zerocoin,  that strive for complete anonymity—which Bitcoin lacks.

Going back to the fundamental question posed by Neil Irwin, by the end of the day, Bitcoin is a reminder of a  fundamental truth: “To function in a modern economy, you’re always putting your faith in something, whether you like it or not”. The question now is if it is worth it and valuable for society in general.

Going Where No One Has Gone Before Part 2

London Technology Week at the forefront of digital innovation

When to Choose Inbound or Outbound Sales