Society 5.0 is a human-centered society that balances economic and technological advancement to solve society’s problems with super-smart AI data systems. It represents a new vision for a smarter society where humans, nature and technology create a sustainable balance enhanced by data.

As it was stated by Professor Harayama Yuko, Professor Emeritus at Tōhoku University and current member of the Board of Directors of the Elsevier Foundation, ORCID and a member of the Scientific Steering Committee for the French National Research Agency (ANR Society): “Society 5.0 is an initiative merging the physical space (real world) and cyberspace by leveraging ICT to its fullest, where we are proposing an ideal form of our future society: a ‘super smart society’ (…) We consider this as a concept to be developed alongside citizens.”

With Society 5.0, digitization is a means, but we humans must remain central actors. Traditionally, innovation driven by technology has been responsible for social development, but in the future, we will reverse our way of thinking, focusing on how to build a society that makes us happy and provides a sense of worth. That is why we focus on the word “society” as the foundation for human life.

As Professor Harayama Yuko said: “Society 5.0 aims to resolve various modern social challenges by incorporating game-changing innovations such as the Internet of things (IoT), robotics, AI and big data into all industries and social activities. Rather than a future controlled and monitored by AI and robots, technology is harnessed to achieve a human-centred society in which each and every person can lead an active and enjoyable life.  Within the context of ever-growing digitalization and connectivity and expanding use of Artificial Intelligence (AI) technologies, several actions have been initiated under this flagship concept by the Japanese government as well as by the private sector.”

Watch the video below to know more about Society 5.0, created by Dinis Guarda.

What makes Society 5.0 different? Having tech, nature and society systems operating in balance scope we can keep a building efficient, supplying energy to a smart city, ensuring that all services provided by that city are efficient and available. That is achieved thanks to a high degree of convergence between cyberspace (virtual space) and physical space (real space). In Society 5.0, a huge amount of information from sensors in physical space is accumulated in cyberspace. In cyberspace, this big data is analyzed by artificial intelligence (AI), and the analysis results are fed back to humans in physical space in various forms.

How Society 5.0 works? In the past information society, the common practice was to collect information via the network and have it analyzed by humans. In Society 5.0, however, people, things, and systems are all connected in cyberspace and optimal results obtained by AI exceeding the capabilities of humans are fed back to physical space. This process brings new value to industry and society in ways not previously possible.

We have gone through 5 society evolutions in human history: 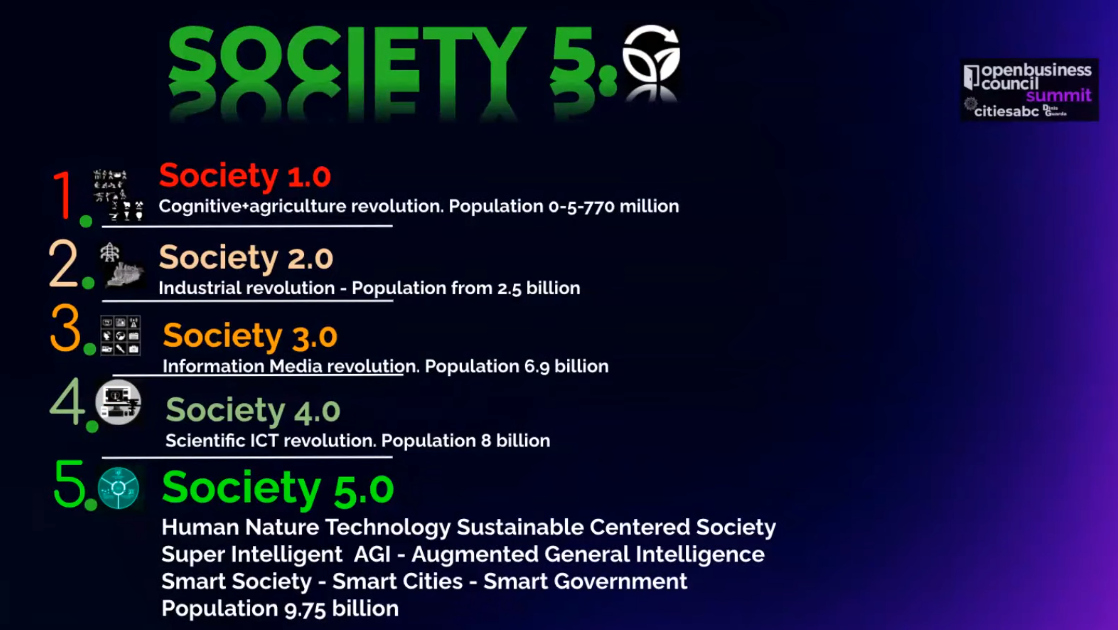 The concept of society 5.0 is a vision of a human nature and tech sustainable society where humans, nature and technology find a circular economy of balance in super intelligent digital transformation – smart society.

“A major turning point in the history of humankind.”

The initial concept of society 5.0 was announced to the world by former Japanese Prime Minister Shinzo Abe in a famous speech entitled “Hannover Declaration” delivered at the CeBIT 2017 in Hannover, Germany. Society 5.0 concept was developed in Japan’s 5th Science and Technology Basic Plan by the Council for Science, Technology and Innovation.

“A major turning point in the history of humankind has arrived.

In prehistoric days, we ventured into the forest to hunt. If that is the first chapter of human history, then the second is when we succeeded in securing a stable number of food calories in the form of rice and wheat.

The curtain rose on chapter three as waves of industrialization arrived in what we call modern times; chapter four saw telecommunications and computers fuse, opening a new door.

We are now witnessing the opening of the fifth chapter, when we are able to find solutions to problems we had been unable to solve. This age in which all things are connected and all technologies fuse is the advent of “Society 5.0”.” 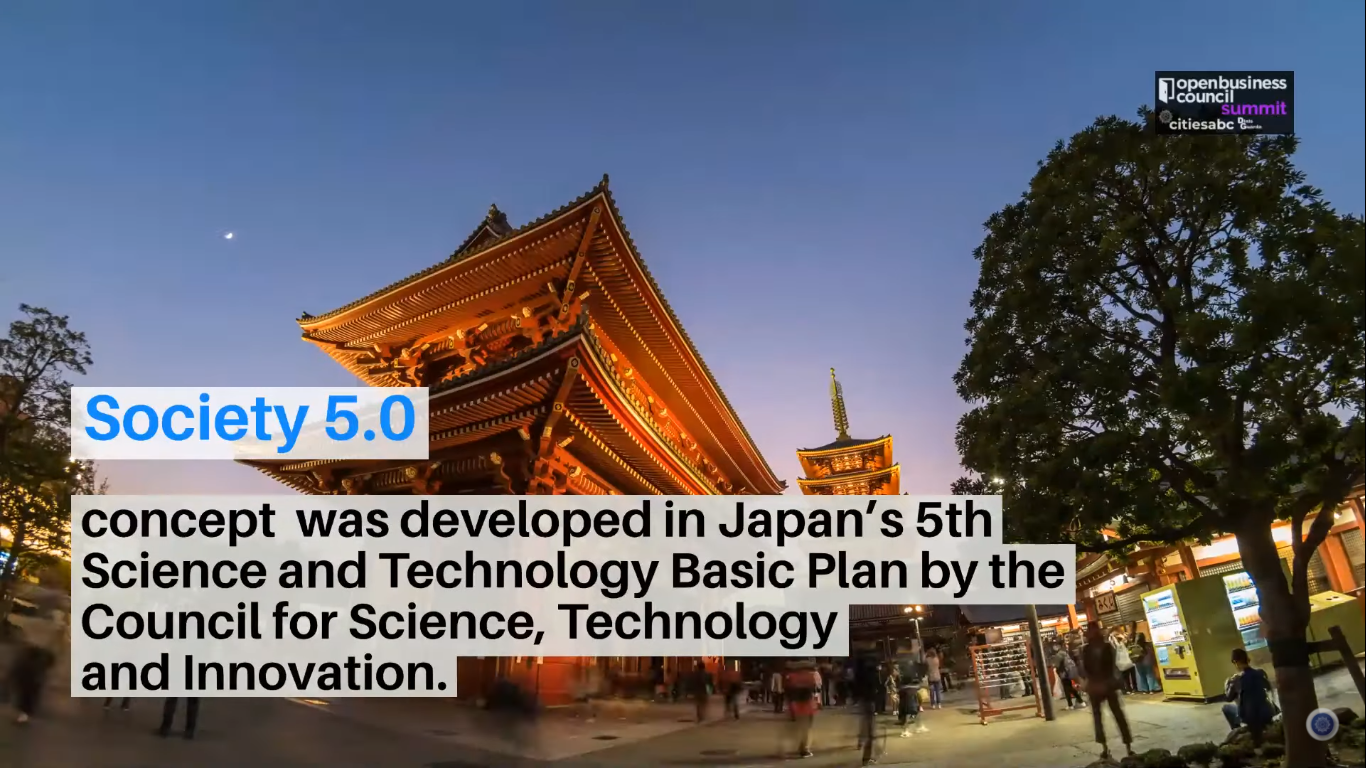 As the economy grows, life is becoming prosperous and convenient, the demand for energy and foodstuffs is increasing, lifespan is becoming longer, and the aging society is advancing. In addition, the globalization of the economy is progressing, international competition is becoming increasingly severe, and problems such as the concentration of wealth and regional inequality are growing. Social problems that must be solved in opposition (as a tradeoff) to such economic development have become increasingly complex.

Likewise, the exponential disruptive technologies of our time can create dystopia or utopia. They will be part of the biggest evolutionary acceleration that will shift humanity more in the next 50 years than in all the different stages of human history and evolution. Even with our basic forms of narrow AI we are already seeing the biggest disruption of human society with manipulation of entire societies with social media, fake news and dark data. However, the biggest challenges are yet to arrive. They will come in the form of health genetic modification – bioengineering and social AI engineerings.

Here, a variety of measures have become necessary such as the reduction of greenhouse gas (GHG) emissions, increased production and reduced loss of foodstuffs, mitigation of costs associated with the aging society, support of sustainable industrialization, redistribution of wealth, and correction of regional inequality, but achieving both economic development and solutions to social problems at the same time has proven to be difficult in the present social system.

In Society 5.0, new value created through innovation will eliminate regional, age, gender, and language gaps and enable the provision of products and services finely tailored to diverse individual needs and latent needs. In this way, it will be possible to achieve a society that can both promote economic development and find solutions to social problems.

Society 5.0 is about augmenting humanity with super intelligence & constant conversation between the best of academic research, science a new dawn of evolution, powered by tech innovation, & all agents in society.

Cryptocurrency, the New and Improved Money… Or Is It?

Millennials, Gen Z, and Baby Boomers – Who Are the Most...

DLT Framework Dispute: Should the Blockchain Be Regulated?