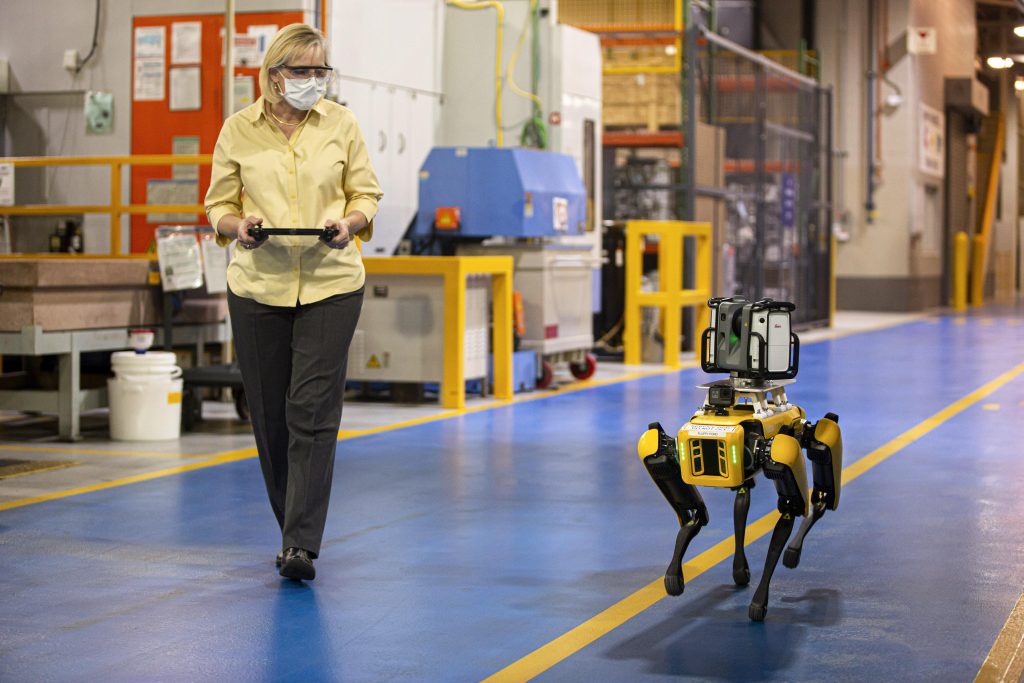 These four-legged dog-like robots can sit, shake hands and roll over. They also can perform 360-degree camera scans, handle 30-degree grades and climb stairs for hours at a time.

That’s because they are actually 70-pound quadruped robots with distinctly dog-like mobility. They’re part of a Ford manufacturing pilot program designed to save time, reduce cost and increase efficiency.

Fluffy, the name given by the robot’s handler Paula Wiebelhaus, is one of the two models Ford is leasing from Boston Dynamics, known for creating sophisticated mobile robots. (The other Ford robot is named Spot after the product’s actual name.)

The robots, which Ford is piloting at its Van Dyke Transmission Plant, are bright yellow and easily recognizable. Equipped with five cameras, the robots can travel up to 3 mph on a battery lasting nearly two hours and will be used to scan the plant floor and assist engineers in updating the original Computer Aided Design which is utilized when we’re getting ready to retool our plants.

“We design and build the plant. After that, over the years, changes are made that rarely get documented,” says Mark Goderis, Ford’s digital engineering manager. “By having the robots scan our facility, we can see what it actually looks like now and build a new engineering model. That digital model is then used when we need to retool the plant for new products.”

Without Fluffy, the update would be far more tedious.

“We used to use a tripod, and we would walk around the facility stopping at different locations, each time standing around for five minutes waiting for the laser to scan,” Goderis recalls. “Scanning one plant could take two weeks. With Fluffy’s help, we are able to do it in half the time.” 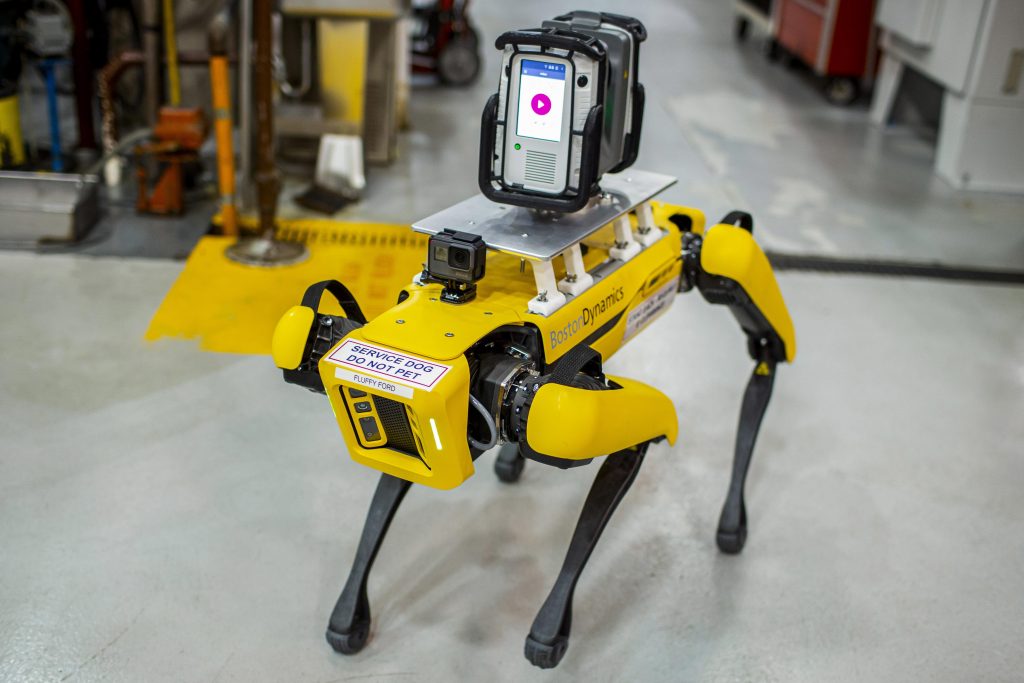 The old way also was expensive – it cost nearly $300,000 to scan one facility. If this pilot works, Ford’s manufacturing team could scan all its plants for a fraction of the cost. These cutting-edge

In time, Goderis says, the intent is to be able to operate the robots remotely, programming them for plant missions and receiving reports immediately from anywhere in the country. For now, the robots can be programmed to follow a specific path and can be operated from up to 50 meters away with the out-of-the-box tablet application.

The key to Fluffy and Spot’s success is their agility, says Wiebelhaus, who controls her robot through a gaming-like device that allows her to remotely see the camera view. Should an issue occur, Wiebelhaus’ control device features a safe stop that stops it from colliding with anything.

The robots have three operational gaits – a walk for stable ground, an amble for uneven terrain and a special speed for stairs. They can change positions from a crouch to a stretch, which allows them to be deployed to difficult-to-reach areas within the plant. They can handle tough terrain, from grates to steps to 30-degree inclines. If they fall, they can right themselves. They maintain a safe, set distance from objects to prevent collisions.

At times, Fluffy sits on its robotic haunches and rides on the back of a small, round Autonomous Mobile Robot, known informally as Scouter. Scouter glides smoothly up and down the aisles of the plant, allowing Fluffy to conserve battery power until it’s time to get to work. Scouter can autonomously navigate facilities while scanning and capturing 3-D point clouds to generate a CAD of the facility. If an area is too tight for Scouter, Fluffy comes to the rescue.

“There are areas in the plant that you might not want to walk into because they might be tough to maneuver,” says Wiebelhaus. “It’s easier and safer to send Fluffy back there.”

Although Fluffy is perfectly capable of rolling over, Wiebelhaus doesn’t see dog shows in his future.

“Fluffy is an amazing manufacturing tool,” said Weibelhaus. “Yes, it’s interesting and new, but Fluffy should really be valued for his work and tenacity. He can do so much more than dance and roll over. We want to push him to the limits in the manufacturing plant and see what value he has for the company.”

How To Successfully Start A Dental Practice: 6 Things You Need...