It was bound to happen. According to a study by Carnegie Mellon University, Employers were much more likely to offer candidates an interview if their social media profiles indicated they were Christian than if their profiles showed them to be Muslim. Experts say discrimination in hiring can be conscious or unconscious and advise employers not to use social media as a screening process to avoid legal problems. Duh.. There are actually a couple of startups using social media to predict credit scores and this too will eventually lead to discrimination. It’s a case of innovating down the wrong path. 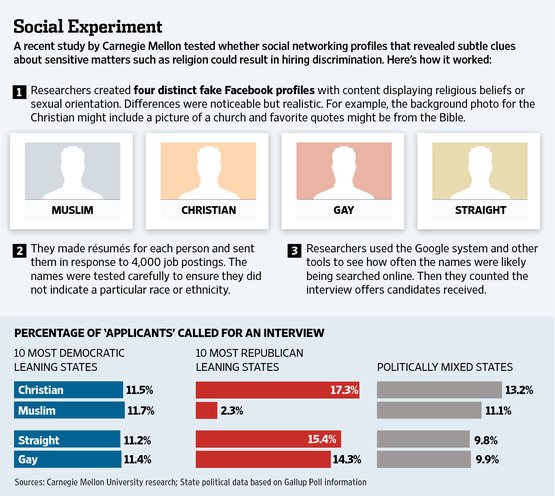 “While it appears that a relatively small portion of U.S. Employers regularly search for candidates online, we found robust evidence of discrimination between certain types of employers,” Fong said. The results of their experiment, involving more than 1,000 survey participants and more than 4,000 employers, were released on Thursday.

The researchers first used a survey experiment involving more than 1,000 online participants to capture reactions to the candidates’ resumes and online profiles, and to test whether or not the candidates’ profiles appeared realistic. The team then measured the number of interview opportunities, a Christian candidate received relative to a Muslim candidate, and the number of interview opportunities a gay candidate received relative to a straight candidate.

They also collected data on the states and counties in which jobs were located and on the firms that listed the openings. “Our survey and field experiments show statistically significant evidence of hiring bias originating from information candidates shared on their online profiles,” Fong said. “Both by itself and controlling for a host of demographic and firm variables, our Muslim candidate was less likely to receive an interview invitation compared to our Christian candidate in most politically conservative states and counties.”

The findings suggest that, while hiring discrimination via Internet searches and social media does not seem widespread, the impact of revealing certain traits online can have a significant effect on the behavior of employers who look online for candidates’ personal information. Of course, this is something you can gain help from religious freedom lawyers with if this was to be feared in your workplace. So what is Facebook saying about all this? Nothing as yet.

“Employers’ use of online social networking sites to research job candidates raises a variety of notable implications, since a vast number of job candidates reveal personal information on these sites that U. S. Employers can’t ask in an interview or infer from a resume” Acquisti said. Acquisti also pointed out in a Wall Street Journal article, that new tech has made it much easier for employers to access this kind of sensitive information at any given time during the hiring process. You have been warned.

The Impact Of The Industrial Internet of Things On Businesses

What Exactly Counts As A Modification When It Comes To Your...

Volocopter is Flying Manned! Will We Witness A Revolution In...

Blockchain The Evolution of the Internet, IoT and Circular Economy Part...