“with special thanks to Kevin Schoeffler and André Costa”

“Augmented reality (…) is a live direct or indirect view of a physical, real-world environment whose elements are augmented (or supplemented) by computer-generated sensory input such as sound, video, graphics or GPS data. It is related to a more general concept called mediated reality, in which a view of reality is modified (…) by a computer.” 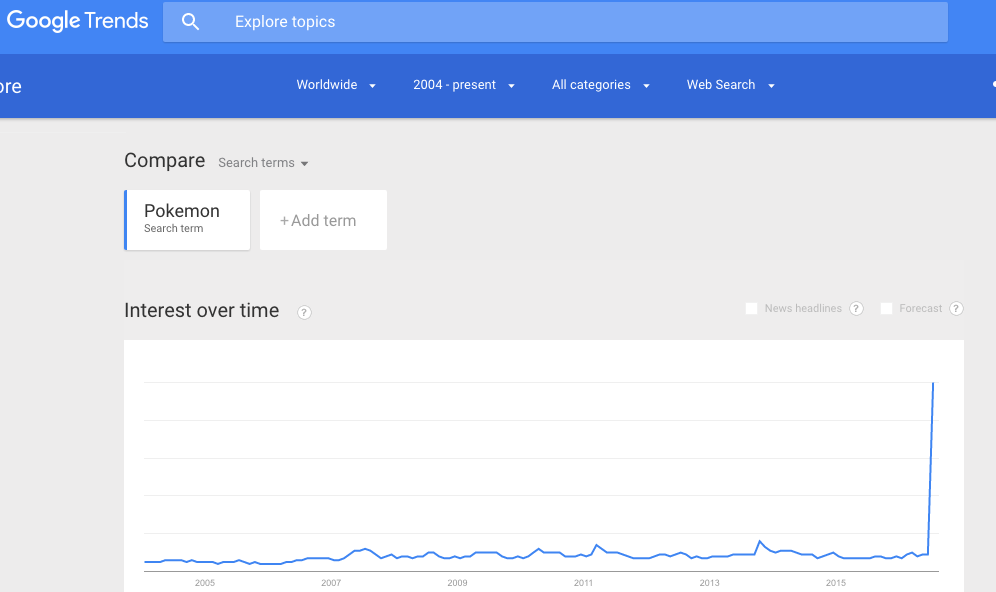 Pokémon Go is considered the most popular game ever for smartphones. It has more daily users than the social network Twitter. In the United States, on the first week, more than 10% of mobile phones with Android downloaded the game. The numbers are amazing.

Most of my friends play Pokémon Go on their phones. I am one of the few exceptions but not because I don’t want to play. I have an older Android that doesn´t meet the requirements to run the game.
But that will change in a few days after I write these words – as I have ordered a new phone capable of running Pokémon Go. I have the perfect excuse: it’s for science. 🙂 I give lectures about digital economy and I do some research on the field. Pokémon Go is, definitely, part of the digital economy. I can always say I’m doing research while I play. 🙂

I went with some of my friends on a group hunt of pokémons. I think the game is good for their health. It “forces” them to walk more than usual. All the stuff is virtual but the players need to go to real places to catch pokemons and do other tasks related with the game.

Pokémon Go is a sort of virtual geocaching. The relation that the game establishes between the virtual world and the real world is well done, relying on the connection to Google Maps. People recognize the places displyed on their mobile phones and “believe” the pokémons are there.

For example, it is possible to take photos with the pokémons before they get caught by players. The pokémons are always moving, to provide the illusion that they are real, as such, it is difficult to take good photos with them.

I also think Pokémon can be dangerous to players. It isn´t a surprise to me to know that some users died while playing the game. On their hunts after pokemons, they behaved like little children carelessly crossing busy streets. An improvement taht could be done to the game is to warn players of the danger of streets with heavy traffic and other dangers.

One of the sources of revenue of the game is the usual: the players. It is possible to play without paying so long as one has a connection to the Internet. However, if the players want to accelerate their progress in the game they can buy stuff like incubators. Why? Every user can hatch an egg of pokémon while he walks. Someone told me that to hatch a pokémon like pikachu is necessary to walk 10 kilometers. And hatch an egg while going on a car doesn’t work because the game detects when the player is moving too fast. The incubator permits to hatch two or more pokémons while the players walk.

The other source of revenue is every small business which is open to public, because the game is geo-located. For example, in Lisbon (Portugal) several bars located in gardens buy “lures” to attract pokémons to their surroundings. An abundance of pokémons in a particular area will attract players that sometimes will buy something to drink.

McDonalds will be one the companies that has associated itself with the game. Many restaurants will have Pokéstops that will permit players to have new eggs and poke balls (necessary to hunt pokémons).

I believe Pokémon Go is just the dawn of augmented reality. Now, the fever of pokémons just uses smartphones. Simply, imagine if the players used glasses that permitted to see the Pokémon together with the non-virtual reality that we see everyday.

Definitely, I will play Pokémon Go on the phone I am about to buy. If some people will find funny a lecturer playing Pokémon Go, I can always say: “Don’t worry. It’s ok. I’m a doctor”.

How Pandora, Spotify and TuneIn Can Segment their Market

Bringing An App To Market Successfully

Move On From A Relationship Gone Sour At Work