Share
Facebook
Twitter
Linkedin
Telegram
WhatsApp
$23.7 Billion were raised by 3738 blockchain companies since 2013, with 75% of all deal flow focused only on early-stage rounds. London has evolved to be a hub for early-stage companies looking to raise seed stage rounds, roughly $1 billion has been raised by blockchain companies in London since 2013.
AI and FinTech emerge as key focus areas for Blockchain start-ups, with data ownership not far behind.

A new study of blockchain investments by Outlier Ventures in early-stage rounds reveals that $23.7 billion has been raised since 2013 with the focus moving from pure cryptocurrency to new applications.

Leading blockchain and Web 3.0 venture capital firm Outlier Ventures  published it’s latest Investments in Blockchain report, which provides an overview into blockchain investment and market trends worldwide since 2013. The report reveals a range of insights into the market:

Blockchain startups have raised finance in multiple forms including ICOs, debt, direct investments and crowd-funding. However, discounting a handful of exchanges and wallets, there hasn’t been an application that has broken through to mainstream adoption, yet. This definitely isn’t for lack of capital. The challenge is more about expertise and guidance at early stages, especially when it comes to areas unique to Web3 such as token design. 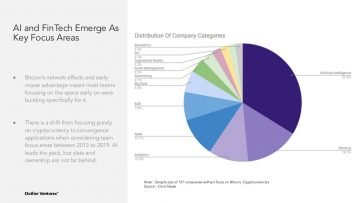 “There is often an expertise gap with capital investments. The heavy competition in early-stage financing for blockchain-based startups means a large number of investors provide nothing more than capital. Investments in equity are considered a hedge against liquid tokens.

In addition to a lack of much-needed guidance during the early stages, this also brings along expectations of quick exits from investors that are used to typically being in liquid assets like ICO tokens.”

75% of all deal flow focused only on early-stage rounds. In 2019, the frequency of blockchain investments will be up nine times in comparison to 2013. Pre-seed, Seed and Angel rounds account for ~75% of all the deals in the ecosystem. 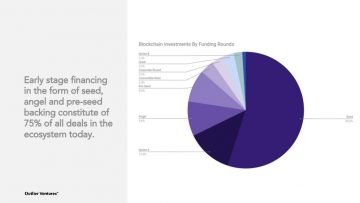 The number of early-stage backers has increased substantially due to the massive returns from early investments in Bitcoin and Ethereum. However,  this financing has not converted to follow on-rounds, and indicates that while early-stage funding is relatively easy, many traditional VCs are waiting for evidence of product-market fit and clearer signs of revenue before making further investments.

“Average seed amounts are healthy, but evolving to reach a Series B raise is a hard business. Challenges with learning curves in user-experience and designing profitable business models make it difficult for startups in the ecosystem to evolve past a point.

“Blockchain startups have the two-fold challenge of establishing a new paradigm and warding off existing competition –  a hard task to do without the necessary guidance in place.”

In terms of blockchain investment focus area, Bitcoin’s early mover advantage and network effects meant most teams focusing on the space early on were building specifically for it.

However, there is a shift from focusing purely on cryptocurrency to convergence applications. AI leads the pack, with Fintech and data analytics starting to close the gap. A growing area of focus is data ownership, along with increasing new interest in self-sovereign identity following the recent data exploitation scandals. 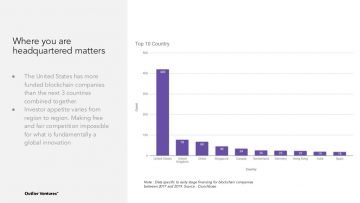 Founders are dependent on Bitcoin’s price to raise capital for what may not necessarily be a token dependent project. The heavy exposure of institutional players in the ecosystem to token prices swing risk appetites on the basis of how tokens perform.

This means there’s greater competition to raise capital from a handful of backers during bear markets, and also competition against a number of other equally well-funded projects during bull markets. Expertise and value-added services are the only key differentiators that teams can rely upon.

Founder access to a network in regions where funding activity is active determines the possibility of the company going on to raise follow-on rounds. The United States leads globally when considered at a national level. However, regional FinTech hubs such as London are catching up with former favorites such as San Francisco. London has evolved to be a hub for early-stage companies looking to raise seed stage rounds, roughly $1 billion has been raised by blockchain companies in London since 2013.

Women in Blockchain: 10 Leaders You Should Be Following

Cloud Computing can level the field for SMEs

Boost The Beating Heart Of Every Business With These Employee Engagement...

The Most Active VCs In The Internet Of Things And Their...