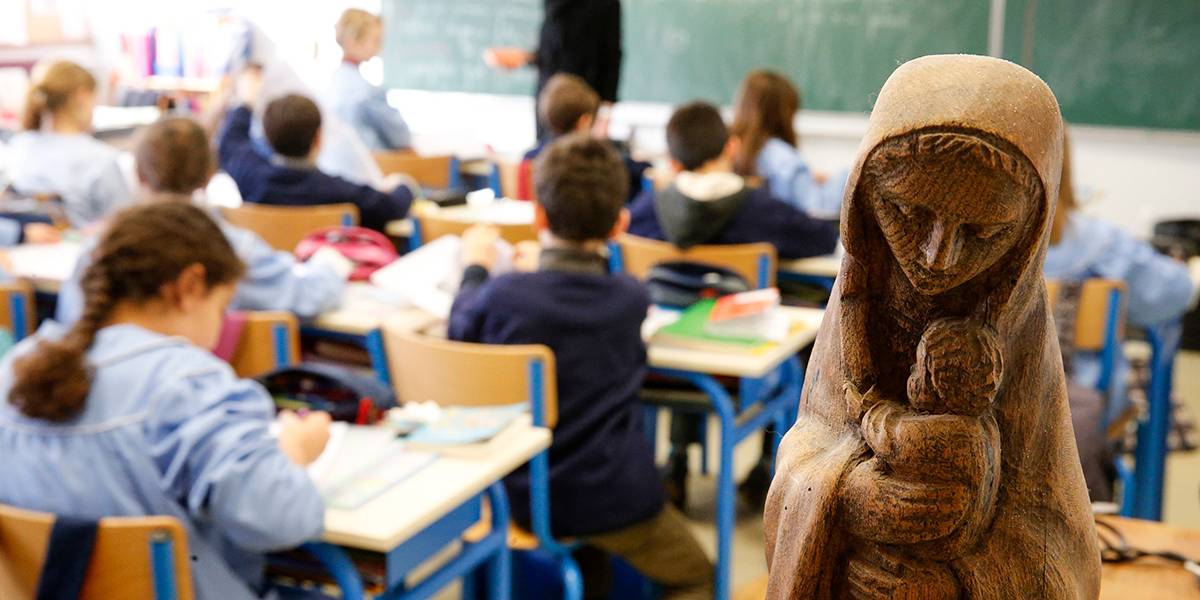 Religion has been the driving force of humanity for hundreds and hundreds of years. In the days when it was rare to meet a literate person, the catholic clergy was rightfully considered to be one of the most educated groups of people in Europe. Its contribution to the preservation of knowledge both historical and otherwise can not be ignored.

Throughout the years, its role in Western education has significantly diminished. Yet, catholic schools still exist and prosper. There are over six thousand of them operating all over the world providing conventional as well as spiritual education to people.

But at its core, the catholic educational philosophy is not exactly about precise knowledge. More often than not, it deals with the unseen, subjective, and immeasurable. Things that science tends to stay away from.

Religion’s greatest historical achievement is providing a system of morals where few existed. And even though its impact on our day-to-day lives has since got lower, it still plays an important role in forming humanity’s worldview.

For those looking for something more than just technical education, there is a wide variety of options. Plenty of Catholic schools offer high-quality education able to compete with other schools. Even in fields that are not connected to religion like law or engineering. Some of them can be easily considered on par with the most renowned universities like Oxford, Stanford, or Harvard.

Catholic schools today strive to push their students to the top of academic excellence. Yet its defining and most important trait is the attention to religious studies and values. And even though most of its students are not likely to go on to pursue a career in religion, all of them will have a strong educational background in these disciplines.

The mission of Catholic education is to preserve tradition and philosophy and to pass it down to the next generation. It is exactly why catholic schools strive to and succeed to meet the needs of their students for academic and social satisfaction.

By staying at the top of the education standards by virtue of their quality, catholic schools get the opportunity to produce a conscious and educated generation. One that will confidently take the torch from its ancestors and provide a decent upbringing to the generations to come.

Many opponents of religion say that faith and knowledge are opposites. But their coexistence in modern catholic schools proves otherwise. The times when Catholicism was an aggressive religion are long gone.

The young generation in catholic schools understands this and does their best to take the best of both worlds. It is a layered and complex topic that demands a lot of time, attention, and effort to get to the bottom of.

The best sources of specialized research, especially if you lack inspiration or time, are online essay services like essaywritingservice platform. Their professionals will help you find and structurize missing information to fill in the blanks in your knowledge and reasoning.

Dealing With the Unknown

Such a base helps the development of a mature set of morals that takes the best of two worlds. But where science deals with the pragmatic and quantifiable, religion has a far more challenging task.

From the moment of its creation, Catholicism was meant to provide an explanation to the ethereal concepts beyond and above the mundane world.

It dealt with this difficult task to the best of its ability, building a set of morals that allowed the society to function in a relatively smooth fashion.

Even though the doctrines managed to fulfill their purpose with admirable efficiency, the growing influence of the clergy claiming to act on a supernatural authority inevitably led the church to a terrible fall destroying the trust people held in the church.

This fall became the root of animosity between modern science and modern religion. Catholicism inherited the Roman principles of knowledge through understanding, which, due to the nature of its doctrines, eventually stalled the progress it was called to encourage.

Abuse and perversion of the Christian doctrine and violence fueled by ignorance replaced and trumped its core values. The echoes of this tragic misstep can still be found today in history books as well as in certain groups of religious fanatics.

Yet, modern catholic philosophy attempts to make up for the mistakes of the past, keeping true to its core values like:

The heritage of catholic culture has played an important role in the forming of the world around us as we know it today.

Its true educational purpose lies in providing humanity with moral standards that would allow our society to exist in peace. Its ideology has had its highs and lows throughout the years of its existence. But the positive educational value is undeniable.

Religious philosophy, as well as its role in modern education, is far from irrelevant. There is still much to be understood and taken from catholic models and ideas.

While the core principles remain largely unchanged, the philosophy and its ways change and evolve alongside the rest of the world as they should.

It is true that modern science has covered a lot of ground that once was considered a monopoly for religion. And these conflicts have prompted some tension between the secular and the religious world.

Yet, it is important to understand that catholic teachings are not meant to be taken literally. At their core, they deal with the spiritual part of human lives. And it might still be too early for humanity to abandon this crutch.

And yet it grew and covered a lot of excess territories. It is absolutely fine to pass the torch to the secular world in some areas. As long as the values of humanity are preserved, it doesn’t really matter how they are called.

The Day When All Objects Will Be One. Welcome To The...

How Technology Has Helped To Improve Logistics