Digital collectables have helped open up blockchain technology to many new avenues outside of conventional financial applications, providing media attention with an influx of funding that has helped NFTs become more widely adopted.

This article is in collaboration with the online event ‘‘The Future of… Arts: Digital 360, NFTs, Metaverse, IP, AI. Live on Dinis Guarda YouTube Channel on December 8 from 1 pm to 3 pm GMT.

Art is collected for many reasons, creativity, originality, expression, fame and prestige.  The range of things that people collect is much broader than art, as wide a category as this is.

Collectables form a class of specific and identifiable objects, which most can recognise as having a purpose and value as something that someone may collect.

Digital collectables have helped open up blockchain technology to many new avenues outside of conventional financial applications, providing media attention with an influx of funding that has helped NFTs become more widely adopted.

Collectables has helped bridge the gap between using blockchain technology to mint cryptocurrency and NFTs as tokens of virtual assets. These tokens are proof that users can own a product.  In representing both physical and digital assets, NFTs are a vital part of the blockchain ecosystem and the broader economy.  Collectables have been a critical step towards a wider acceptance of digital assets.

The use cases are vast, and many developers will likely develop new and exciting innovations for this promising technology.

The rise of NFTs

The NFT is a new field of interest and opportunity for collectors. Marketplaces give them direct access to a broader selection of creative work, and NFTs provide them with surety of ownership and exclusive control over asset use and bespoke content.

“Attaching value to artworks that are ubiquitous rather than scarce … NFTs have rapidly expanded the demand for digital art forms that haven’t always been valued as much as physical paintings, sculptures, and installations.”

What is a Collectable?

A collectable is any object regarded as of value or interest to a collector. Common collectables include antiques, toys, coins, comic books, and stamps.

Some collectables arise from a fashion or fad. Some have been explicitly manufactured as goods for people to collect, such as collectors’ cards, special edition toys and plushes.  Others are naturally scarcer, more unique, and more enduring interest, such as antiques.

Antiques are an exciting category as they illustrate some of the differences. Not all antiques are rare, and nor are they all considered collectable.

People who amass collectables take much time and care to put together a collection, usually going to some lengths to acquire, preserve and display them.

In some cases, collectables are more valuable as a set rather than disaggregated.

Rare collectables are usually sold for a premium, especially if they are in mint condition.  The condition of a collectable has a significant impact on its market value. Having a collectable in pristine condition means the price can go up. Yet if an item has deteriorated over time, there’s probably a good chance it will not be worth much—if anything at all.

Manufactured collectables are often more tokens of marketing hype and consumer dynamics than the actual value, and many items made for the purpose fail to retain any appeal or value.

The Beanie Baby fad of the 1990s is an excellent example of a mass-produced item marketed as a collectable. Ty Warner, the product’s manufacturer, produced hundreds of small plush toys with a floppy, bean bag-like feel. Consumers went crazy over them, believing they would become valuable one day. However, most were so widely owned that they never acquired any resale value, apart from limited editions that were hard to find as they were snapped up by resellers as soon as they were released.

Factors that increase the value of collectables may not come into play for many years and never at all for most items.

As a product dwindles through attrition after its production ends, some things become collectable due to their relative scarcity. If the product is still in production, the company eventually sees the market signal and produces more to supply the market. Items currently for sale may run into supply issues that drive up the price asked for by resellers, but this is a different phenomenon from what drives the value of authentic collectables.

Examples of items without any inherent utility or commodity value that have become extremely valuable include trading cards and stamps.

One of the most valuable collectables globally is the T206 Honus Wagner baseball card issued by the American Tobacco Company in 1909. Honus Wagner cards almost always sell for over $1 million if they are in good condition. A few have even sold for over $2 million.  A very impressive sum for a piece of printed card once included in cigarette packs as a gift.

Another example is the ‘Treskilling Yellow’, a misprinted Swedish postage stamp that sold somewhere around $2.3 million in 2010.

These are all, in their way, quite random items to collect and illustrate one of the challenges with collectables as a form of investment. Predicting whether something will become collectable (and valuable) is very difficult, as it depends on general sentiment about a particular cultural trend that is hard to forecast.

In the virtual world, the concept of ownership and the desire to have something iconic seem alive and well. Collecting is a behaviour that stems from ownership, and NFTs provide endless opportunities for collectors to indulge their interests and, potentially, make a significant return on their investment. Collectables have gone in several directions.

A pioneer NFT project was CryptoKitties, developed by the blockchain cat game Cryptokitty, in which players adopt and trade virtual cartoon cats.

Since then, some CryptoPunks have sold for more than $1 million. This and other famous examples such as CryptoPunks, Blockchain Cuties, and Avastars have helped extend peoples’ understanding of the potential of NFTs, bridging the gap between cryptocurrency as interchangeable tokens and NFTs representing unique assets.

Another category of digital collectables is trading card games such as Pokémon, Hearthstone, YuGiOh and MTG, all of which have millions of collectors and players worldwide, where rare cards such as ‘Charizard’ are highly sought-after.

Gaming has reinforced and encouraged human collecting behaviour.  Indeed, success in many games depends on the collection of virtual trophies, tools, and badges necessary to complete one level or unlock another, as will be explored in the next chapter.

This approach is not exclusive; it applies to all creative industries, sports, and others.

NFTs have, in a short time, tapped into our desire to acquire and own, creating value and a whole new dimension of investment commodities.

“NFTs can ascribe a unique identification system to any object in the world — digital or physical. This is key to understanding the value NFTs create — the unique data means inherent, absolute exclusivity. If you go on any e-commerce platforms, users are selling physical items with no ID identification,” says Nick Chan, founder and CEO of Refinable, an NFT marketplace on Binance Smart Chain.

NFTs can be used to encapsulate and represent the ownership of almost anything, which makes for a vast potential market.

Posting, tweeting, snapping — releasing a human creation out into the world, whether you put it on the Internet yourself or not, seems to have an almost certain endpoint of universal accessibility. However, the person acquiring Winkelmann’s artwork doesn’t just get high-quality versions of the online posts arranged in a collage. They get exclusive, inviolable ownership, which is unique in the current times.

What the future looks like for artists, collectors and businesses? That’s the question that the speakers from the upcoming event ‘The Future of… Arts: Digital 360, NFTs, Metaverse, IP, AI’, hosted by Dinis Guarda, will try to answer. 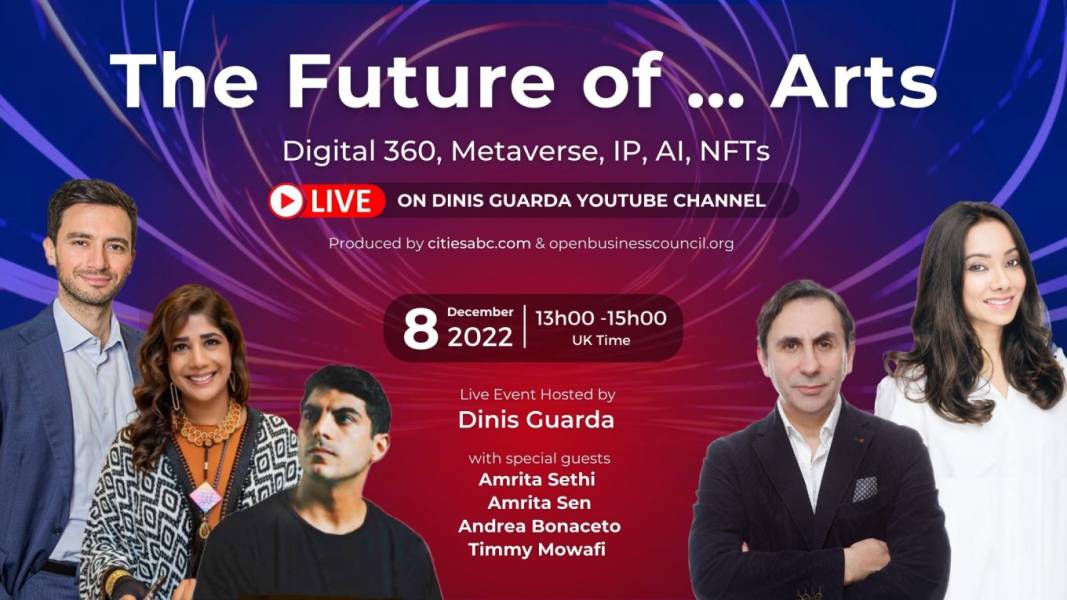 5 Supplements for Alertness and Memory During Long Computer Sessions (Other...

Tips to Make Your Business Lean and More Efficient