China Economy is growing at increased speed. The media speaks about it and tries to find the reasons why. Most say that these are connected with AI. As China becomes more dominant economically, that will extend into becoming probably the major leading nation in terms of artificial intelligence.

China, has more consumers than any other country, and also more Big Data, due to a flourishing app mobile economy, strong E-commerce and a state-backed data harvesting program: its social credit system. It also has the world’s leading facial recognition startup companies. Chinese government is also very keen in pushing AI development as much as possible. In 2017, the State Council of the People’s Republic of China (also known as the Central People’s Government) published its Artificial Intelligence Development Plan (here you can find the original document in English). China is very supportive of technology firms that were able to scale globally, such as Alibaba, ByteDance and Huawei. This has allowed these three firms tremendous growth to be global leaders in their respective industries.

But as the Last Futurist article states, China’s advantage in terms of AI can be problematic and lead to ethical problems. Using facial recognition in schools and AI in education it’s highly unethical to western standards. 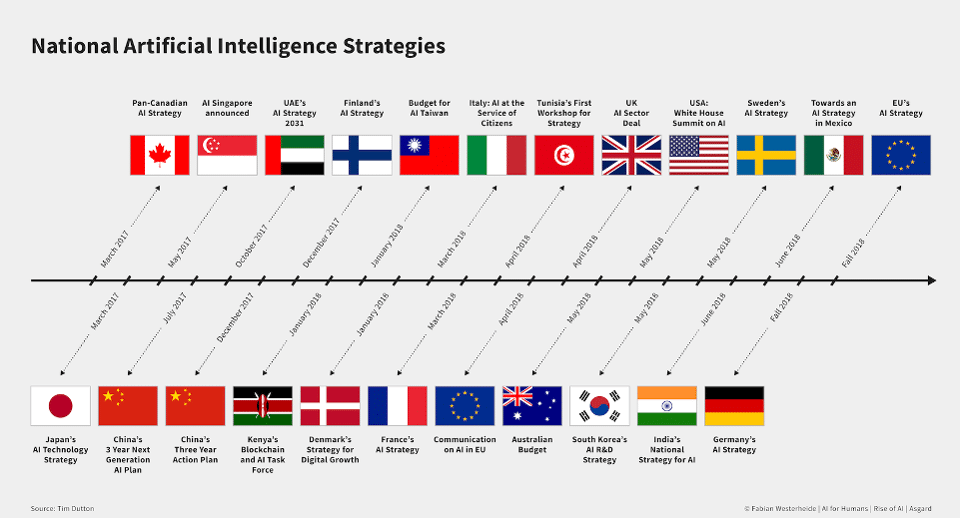 AI Intelligence StrategyChina’s rising tech giants  and its focus in technology, makes the country hold high dreams to position itself as leader in the technology/AI sector. This can work, as China is a country of scale with a large population. The last futurist writes: “Asia gives it many advantages in Big Data and how its AI capabilities could give it more influence in the world. China combines a gigantic amount of data with talent, companies, research and capital to build the world’s leading AI ecosystem. It’s very realistic to assume China will be the AI leader by 2030.”

China uses facial recognition software in such a way, that some state it is the wild-wild west of facial recognition and surveillance capitalism. This is also done by the state, particularly by using its social credit system. The country does need to develop a system of ethics and policies around AI development and to do this as part of a consortium looking for common global ground in terms of ethics/legislation around AI.

That means the 2020s will see dangerous norms of how AI will be implemented and how data sharing will occur to the detriment of individual freedoms.

The Last Futurist writes: “Chinese companies are world leaders in facial recognition technology for good reason – they have a huge domestic market to test products on and the government’s support. The Chinese state is so determined to “win” that the weaponization of technology against people is the least of its concerns. Now western companies have begun to behave in the same manner. Chinese ethics in AI are already impacting the future of humanity.”

China really advanced in terms of facial recognition adoption and integration. On the other hand the launch of China’s social credit system  resulting from its more authoritarian government, means that the country can implement AI/big data technologies that other countries have no hope of competing with.

China could become the first socialist regime governed by and partly manged by AI. In the history of humanity it is pretty significant, but it is also scary as it can hamper freedom. Not everyone will want to live in societies operating in a “big brother is watching you” kind of style.

The Last Futurist writes that it will take until 2030 for China to take the lead in terms of technology and AI capability. In order for that to happen there is the need for a more mature and efficient start-up ecosystem on which younger AI companies are building. But interest and capital exist, both from the state and the private sector, for the establishment, scaling and growth of AI startups in China.

China will also need to develop AI talent at home in the next decades to truly be better positioned in the field of machine learning and AI engineers. The US has here an advantage, as it is home to five of the world’s top 10 universities in the AI field, while China has only three. China’s authoritarian political climate and its surveillant society means it will be more difficult for the country to attract and retain top talent who is often educated in the United States or the U.K.