The Bank of England is in deep need of major reform to maintain the public’s trust, including the creation of a credit policy and a new approach to choosing the next governor, research and campaign group Positive Money has declare recently in a report which was launched at the UK Parliament last October (2019).

In their new report, the group said Threadneedle Street’s response to the financial crisis with policies such as money printing has been “complex and shrouded in mystery,” distancing it from public understanding and oversight.

“The Bank of England is one of the most powerful public economic institutions, so it is vital that it works in the public interest to the best of its ability. We look at several areas that could improve legitimacy, asking the following questions:

How are appointments made to the Bank’s most senior positions? How do we ensure that central banks are scrutinised sufficiently by Parliament, with input from experts in academia and civil society?

Can we get the Bank of England to better understand the lived experience of people living and working in the UK economy? How do we get the Bank to work more coherently with the Treasury?”

“To restore the democratic legitimacy and accountability of the central bank,” Positive Money recommended that the BoE, Treasury and Department for Business, Energy and Industrial Strategy (Beis) unite to create a credit policy for Britain with certain goals in mind. Such a credit policy would be worked out by a new commission and might seek to “to grow priority sectors, to finance innovation, to reach small businesses or farms, or to decrease consumption and mortgage lending,” the campaign group said. 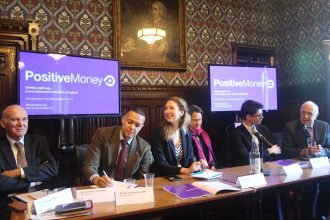 Another point Positive Money also focus on is its call for the Treasury to publish a shortlist of candidates to be the next BoE governor and allow MPs to respond. Current governor Mark Carney is due to leave his post in January.

Finally another important point of the report’s recommendations was for greater diversity of Bank appointments, especially to the monetary policy committee (MPC). Eight out of nine of MPC members are men and all are white.

Not everyone welcomed the suggestions put forward by the report positively. According to City AM Erik Norland, senior economist at CME Group, said such a policy would “get the BoE into the business of picking winners and losers which might not be its strong point”.

Tej Parikh, chief economist at the Institute of Directors, said: “Improving diversity, transparency and the MPC’s democratic outreach are admirable goals.” He added that such issues “are already on the Bank’s agenda to improve its effectiveness”.

But is that so ? That effectiveness truly needs to be seen then though, with more women and ethnic diversity.  Former MPC member Andrew Sentance  mentioned how he also welcomed a change in the way appointments to the Bank are made. “We do need to have a big rethink,” he said.

“If you coordinate monetary and fiscal policy better together, that could be a benefit for the economy,” he said.

A HM Treasury spokesperson said: “The government remains committed to a successful framework that has accountability and credibility at its heart with an independent monetary policy committee and financial policy committee.”

Changing Our Relationship With Money

Beware of the “Lessons” You Already Learned

The Benefits Of Further Education For Business Owners