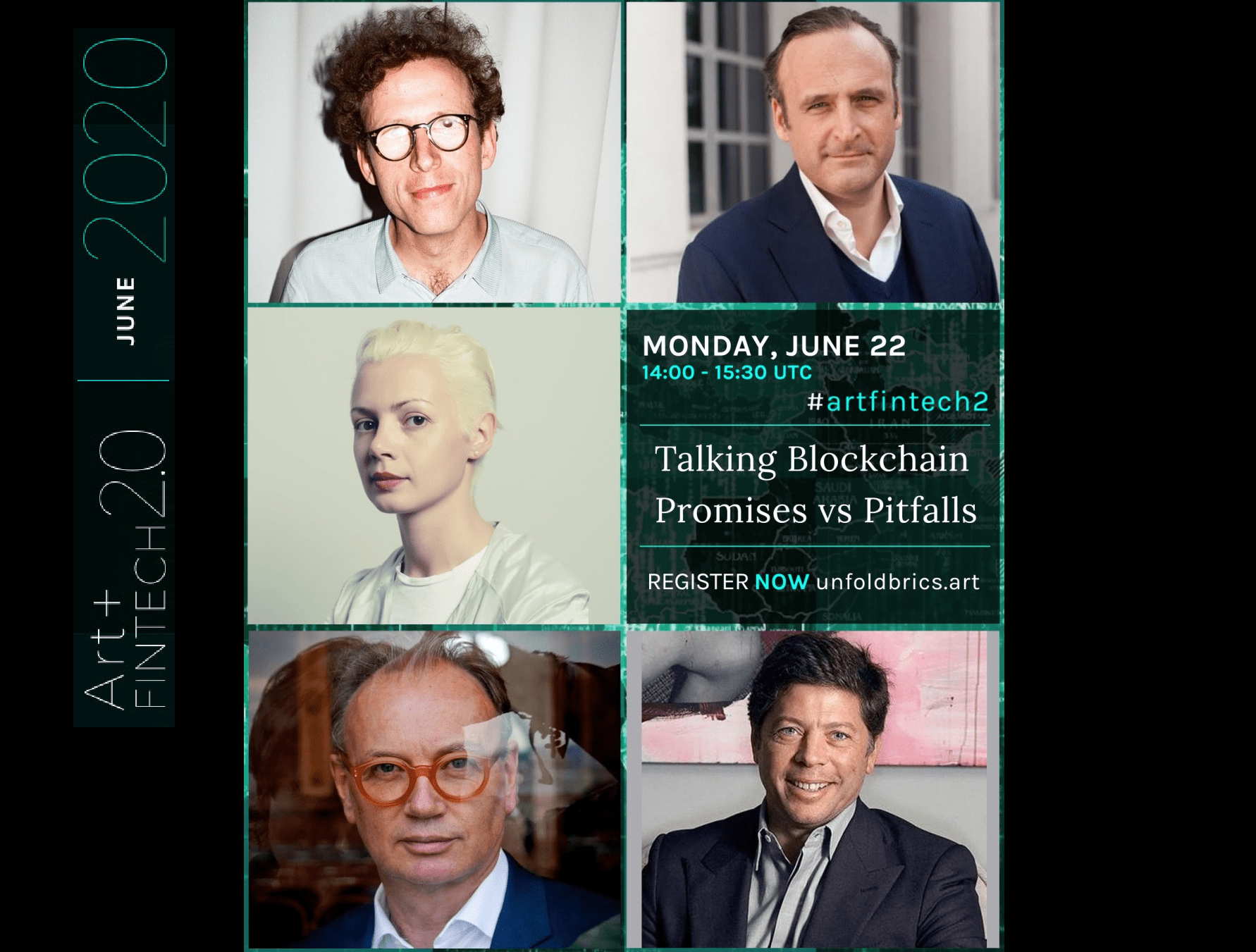 UNFOLD Art XChange is pleased to announce that the third blockchain and related technologies session of the Art + FinTech 2.0 summit will commence on Monday, June 22. The second session took place on Friday featuring the main theme: How Blockchain is Creating a New Art Market Economy. Learn more and access all video archives here.

There has been wariness among businesses about the adoption of blockchain technology since its invention in 2008. This is partly because of its novelty and its association with volatile cryptocurrencies. Some years on and the situation is changing as distributed ledger technology is adopted by mainstream sectors including banking, the automotive industry and healthcare.

Nevertheless, the uptake of blockchain technology in the art market — especially among higher-end and blue-chip galleries — has been slow. This session will look at the reasons why museums, galleries and collectors have been hesitant to adopt it despite its potential to establish authenticity and provenance — key aspects in establishing value for expensive works of art.

Can blockchain technology stimulate the market for historically difficult-to-sell digital work, including video? Will galleries and collectors accept digital logs detailing prices and ownership history, or will traditional anonymity be maintained? Who will be accepted as verifiers of authenticity? Will the use of blockchain encourage a new generation of digital forgers? Do the art market, museums and the technology sector understand each other well enough to overcome these hurdles?

Frédéric de Senarclens is an art dealer who has created a number of successful online art businesses, including Art Market Guru, ArtAndCollect and ArtAndOnly. He specializes in analyzing the impact of new technologies such as blockchain, virtual reality (VR), augmented reality (AR) and artificial intelligence (AI) on the art market.

Johann König is a gallerist with spaces in Berlin, London and Tokyo. He is known for his focus on a younger generation of interdisciplinary, concept- and space-oriented artists — including many working in the digital sphere.

Christina Steinbrecher-Pfandt is a former gallerist and director of Viennacontemporary who now works in the tech sector. She became increasingly concerned about the difficulties artists working in video and new media face in selling their work, and has developed a blockchain solution to this problem. The Blockchain.art platform, which she co-founded, ensures the authenticity of digital works of art, allows sales and resales, and incorporates a tool that allows galleries to use the platform as a digital shop integrated into their own websites — a “white label” blockchain solution.

Adam Lindemann is a well-known art collector, investor and founder of the Venus Over Manhattan gallery. One of his multiple blockchain ventures, includes Artblx, which organized “The Art of Blockchains” conference during Art Basel Miami in 2018 that brought together influential names from art, technology and business to investigate potential impacts of the blockchain technology on the art market.

Alfred Weidinger is an art historian and museum director who is now the New Scientific Director of the Upper Austrian State Museum in Linz. An authority on the work of Gustav Klimt, he is also known for his interest in art and technology. He recently organized a groundbreaking exhibition and book, Virtual Normality: Women Net Artists 2.0, about female artists’ perspectives on sexuality, gender and identity in the digital age.

How Medical Practices Are Adapting to Modern Technology

What Are the Sales Management Tools for Improving Proficiency?